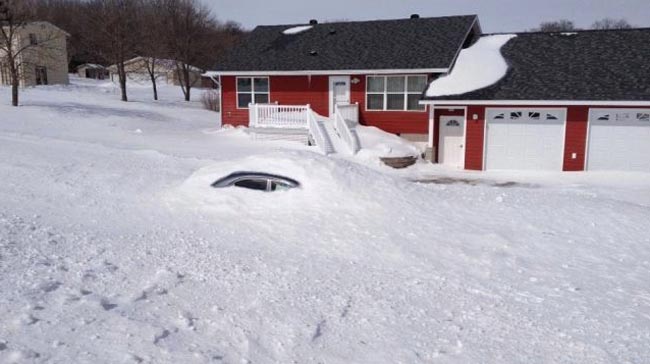 Photo Wunderground
It is set to be a record-setter, storm Wesley is set to be one of the heaviest April snowstorms on record according to the Weather Channell.
Wesley is an intense winter storm taking aim at the Plains and upper Midwest.
More than a foot of snow is likely in parts of the Plains and upper Midwest.
Blizzard warnings have been issued in the Plains from Wednesday into early Friday.
This includes areas still dealing with flooding, including parts of the Missouri Valley.
Blizzard warnings have been issued for parts of six states in the Plains and upper Midwest as Winter Storm Wesley takes aim at those regions with heavy snow and high winds, contributing to dangerous travel conditions and likely shutting down highways. Wesley is expected to flirt with all-time April low-pressure records in parts of the Plains.
That said, it's not clear this storm will be strong enough to be deemed a "bomb cyclone" since its atmospheric pressure might not meet the meteorological definition for bombogenesis, which is a 24-millibar pressure drop in 24 hours.
Blizzard warnings have been issued by the National Weather Service from parts of northeastern Colorado to southeastern Wyoming, northwest Kansas, western and central Nebraska, much of South Dakota and southwestern Minnesota.
This includes Denver; Cheyenne, Wyoming; Scottsbluff, Nebraska; and Pierre, South Dakota. Various winter storm watches and warnings and winter weather advisories have also been posted from portions of the northern and central Rockies into the upper Mississippi Valley and Great Lakes. Thundersnow was reported early Wednesday in parts of South Dakota, including in Pierre, the state's capital city.
High spring temperatures will give way to heavy snow, gale-force winds and life-threatening conditions across a swath of the central United States running from the Rockies to the Great Lakes, according to the National Weather Service (NWS). Pueblo, Colorado, hit 85 degrees Fahrenheit (30 Celsius) on Tuesday but will drop down to 25F (minus 4C) by early Thursday.
Similar temperatures are forecast in Denver.
“This is potentially a life-threatening storm,” Patrick Burke, a meteorologist with the NWS’s Weather Prediction Center in Maryland, said early on Wednesday.
The storm is expected to bring blinding, heavy wet snow across the region, likely downing trees and causing widespread power outages, widespread road closures and making driving treacherous, Burke said.
“It’s slow moving.
It won’t push farther east until Friday,” he said.
The storm has already sparked flood evacuations in Oregon and caused flooding in Washington state. Some areas of western Minnesota and southeast South Dakota were expected to get up to 30 inches of wet, heavy snow, the NWS said.