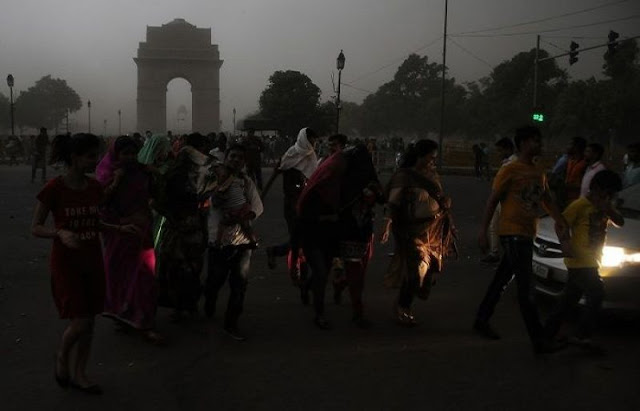 After enduring a heatwave of temperatures in the mid forty deg C for the last month, more than 100 people are dead in India and Pakistan after powerful storms unleashed dust, lightning, hail, rain and high winds.
The Times of India reported that at least 64 people had died during severe thunderstorms in India.
Most of those died from lightning strikes or electrocution.
Homes were damaged, trees uprooted and power lines knocked down in Madhya Pradesh, Gujarat, Maharashtra and Rajasthan states.
There was also reported the damage to crops by heavy rains and hail.
The worst hit was Rajasthan state, where at least 24 people died, relief officer Ashutosh Pednekar said, according to the Associated Press.
According to The Weather Channell, in Pakistan, at least 39 people were killed and 135 injured in torrential rainfalls.
At least 80 houses were damaged, and there were several reports of roofs and walls collapsing, with the worst of the impacts in Punjab, Balochistan and Khyber Pakhtunkhwa.
More than 2 inches of rain was reported in Islamabad.
A hail storm also hit parts of India. On Monday, the city of Pune had its first hailstorm in several years, according to the India Meteorological Department.