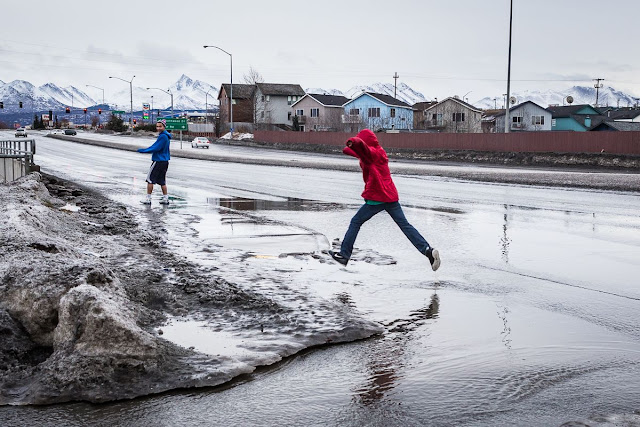 Alaska residents accustomed to subzero temperatures are experiencing a heatwave of sorts that is shattering records, with the thermometer jumping to more than 30 degrees Fahrenheit above normal in some regions.
"Both February and March have been exceptionally warm," Rick Thoman, a climate specialist with the Alaska Center for Climate Assessment and Policy, told AFP.
"Many places are on their way to their warmest March on record."
He said that cities and towns in the northern half of the state, including Wainwright, Nuiqsut, Kaktovik and Barrow (also known as Utqiagvik), could see temperatures soar 25 to 40 degrees Fahrenheit above normal this weekend as the warm trend continues.
"At Barrow, through yesterday, they've had daily record high temperatures five separate days this month ... and that's quite an achievement," Thoman said.
"This is following on the heels of the very warm, and in some places record warm February," he added.
"We now have April or May weather in March."
In Barrow, for example, the temperature jumped to 30 degrees Fahrenheit (-1 Celsius) on Thursday when the normal high is minus three Fahrenheit.
"Deadhorse, AK, is set to finish March about 23°F above normal for the month," Brian Brettschneider, a climatologist based in Alaska tweeted on Thursday.
Thoman predicts the warm streak to continue through April, with the highest temperature spikes expected in the western part of the state.
He said the dramatic warming Alaska has experienced in recent years -- which is partly linked to a decline in sea ice and Arctic ocean warming -- had wreaked havoc on local communities, wildlife and the economy.
Many recreational sled dog races have had to be cancelled this year and the routing of the famed Iditarod race had to be changed as what is normally solid sea ice was open water on part of the race route.
Crab fishing has also been affected as the sea ice used as a platform for fishermen was non-existent or too thin in some areas.
Thoman said the seal population is also likely to be affected in the coming months as some of the species give birth on solid ice.
Amy Holman, regional coordinator for Alaska at the National Oceanic and Atmospheric Administration, said the warmth has, in addition, had a deep impact on transportation as two-thirds of communities in Alaska are not accessible via roads.
"In the winter, frozen rivers become major transportation corridors connecting villages," she told AFP.
"The Kuskokwim River is a primary example of this.
"The warmer temperatures have melted the rive ice to the extent it is no longer safe for truck or car travel.
Thoman said global warming had led to the lowest ice levels in the Bering Sea -- which connects with the Arctic Ocean -- since 1850 when sea ice records began.
"My worst fear is the speed of change and being able to cope," he said. "Alaskans are resilient, our indigenous culture has been here for 10,000 years but change has never occurred at this pace."