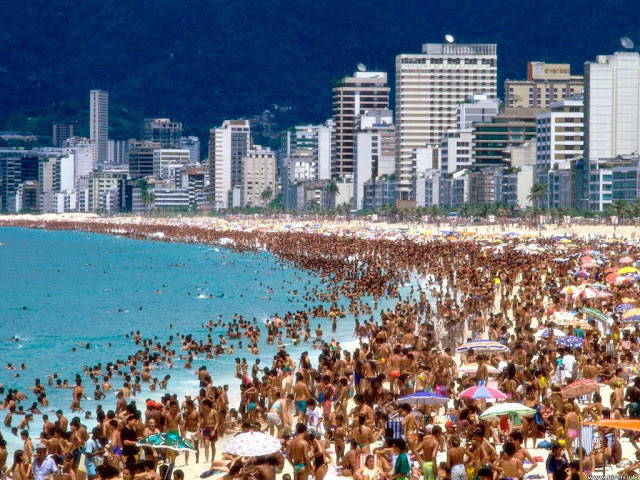 Extreme heat has been affecting Australia and now southeastern Brazil.
Temperatures have spiked above 42-degrees Celsius (108 F).
In Rio de Janeiro, special measures are in place to help keep people and animals cool during the hottest summer in almost a century.
Rio's beaches have never been so crowded.
It is the only outdoor space for locals and tourists to find some relief from an unusual heat wave that started in late December.
"I am definitely happy that I am not in the snow, but is also very hot here," said American tourist Russ Franken.
"It's easy on vacation, but if I had to go, like, in public transportation to work every day, it would be terrible."
Ricardo Lira, a lawyer, agrees. Rio's Court of Justice, for example, relaxed its dress code allowing lawyers to ditch suits to cope with the heat.
"I think it's a healthy measure because coming to work with a coat and a tie is impossible.
Not inside the court, that has air conditioning, but to come and go with some 42 degrees is horrible." It's not just humans who are suffering from the sweltering heat.
At the Rio Zoo, lions are getting frozen meat and bears are getting giant fruit popsicles to avoid dehydration. There is a famous joke in Brazil that Rio has two seasons - summer and "hell."
And according to weather experts, this year's "hell" season is hotter than ever, setting records for scorching temperatures.
Thiago Sousa, a meteorologist at the National Institute of Meteorology, says a mix of factors have made Rio surpass historic maximums.
"It has been 97 years since Rio had such a hot January, until this year of 2019, when a warm air mass is hitting the state and the El Nino event is not allowing cold fronts to reach us."
While the heat wave keeps breaking records, a happy few can cool off at the beach, even as concerns linger.
Beachgoers and climate scientists alike say something is wrong with the weather, here, and everywhere.