Thousands of birds found dead at one of Western Australia's most important inland wetlands: Heatwave and algae bloom responsible 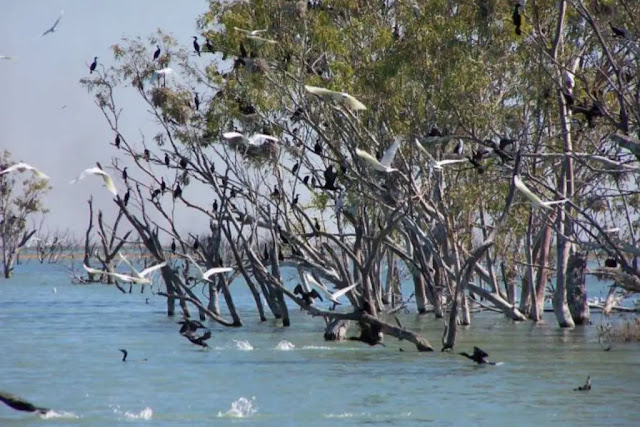 Thousands of birds have been found dead at one of Western Australia's most important inland wetlands.
A Department of Primary Industry and Regional Development veterinarian arrived at Lake Gregory in the East Kimberley earlier this month to take a sample, and found a number of wild birds in "poor conditions with low body weights".
On a department inspection, it was found several thousand birds had died at the wetland, but the cause of death remains a mystery.
Lake Gregory is a permanent freshwater lake located between the Great Sandy Desert and the Tanami Desert and was previously described by the department as the most important inland wetland in Australia.
Its ecosystem helps support about 650,000 waterbirds and is a major breeding ground for up to 80 species and a major migration stopover area for shorebirds.
It supports more than 1 per cent of the world population of pink-eared ducks; the same species believed to have been found dead.
A number of black swans also died.
A department investigation excluded bird flu and Newcastle disease as a cause of death, but later identified the presence of blue-green algae close to the lake.
"Laboratory testing has detected blue-green algae in water samples from nearby ponds, which likely contributed to bird deaths," a department spokeswoman said.
"Blue-green algae can be present in water sources and levels are influenced by environmental factors including warm water temperatures, sunny days and nutrients.
"In addition, the water level at the lake is very low, coupled with recent very high temperatures in the area, which may have contributed to the deaths of the birds.
"Waterbirds are vulnerable to these natural ecosystem changes.
Recent rain in the area appears to have alleviated the issue."
There is no quarantine in place.
A spokeswoman for the Department of Biodiversity, Conservation and Attractions said bird deaths weren't uncommon following the wet season.
"Lake Gregory was surveyed last year and more than 20,000 waterbirds were recorded," she said. "This was a large breeding event following an above average wet season.
Bird deaths following such an event are not unusual, particularly when water levels reduce. "Waterbirds are vulnerable to natural ecosystem changes.
Fluctuations in water temperature, nutrients and water levels can result in fluctuations in waterbird numbers."
A 2009 condition report on Lake Gregory identified a number of threats the wetlands could face in the future.
"The level of threat to the site is high ... wetlands are highly productive environments, but are also easily disturbed," the report read.
Lake Gregory is maintained by traditional owners and rangers.