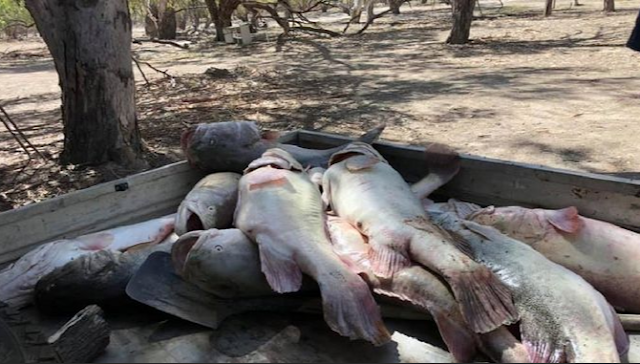 Photo news-mail.com.au
Hundreds of thousands of fish have died in far western NSW as drought conditions continue to grip the state.
The NSW Department of Primary Industries and WaterNSW are investigating a large fish kill in several rivers and dams at Menindee after a sharp cool change hit the region following a period of very hot weather.
"The ongoing drought conditions across western NSW have resulted in fish kills in a number of waterways recently," DPI senior fisheries manager Anthony Townsend said in a statement on Monday.
The sudden large drops in temperature may have disrupted an existing algal bloom in the region, killing the algae and depleting dissolved oxygen, worsening the water quality for fish, Mr Townsend said.
The golden perch, Murray cod and bony herring are among the species affected in the Namoi River near Gunnedah, the Lachlan River at Wyangala Dam and the Darling River.
It follows an incident in December after intense rainfalls following a spate of hot weather resulted in more than 10,000 fish mortalities along a 40km stretch of the Darling River.
Mr Townsend said preliminary investigations into the latest fish kill event suggest hundreds of thousands of native fish have been impacted in the same stretch of waterway and further downstream. "The current low flows and warming temperatures are likely to pose an ongoing threat to native fish throughout the summer," he said.
Fish experts are now extracting the ear bone of some of the Murray cod killed which will help them trace where the fish have been and to improve their knowledge of how the waterways are managed. WaterNSW executive manager Adrian Langdon said it was "almost certain" dissolved oxygen levels will continue and possibly increase as the hot weather continues without significant rainfall.