A wall of Jellyfish have stung more than 22,000 beachgoers on Australia's Gold and Sunshine coasts in 1 week more than double the yearly average 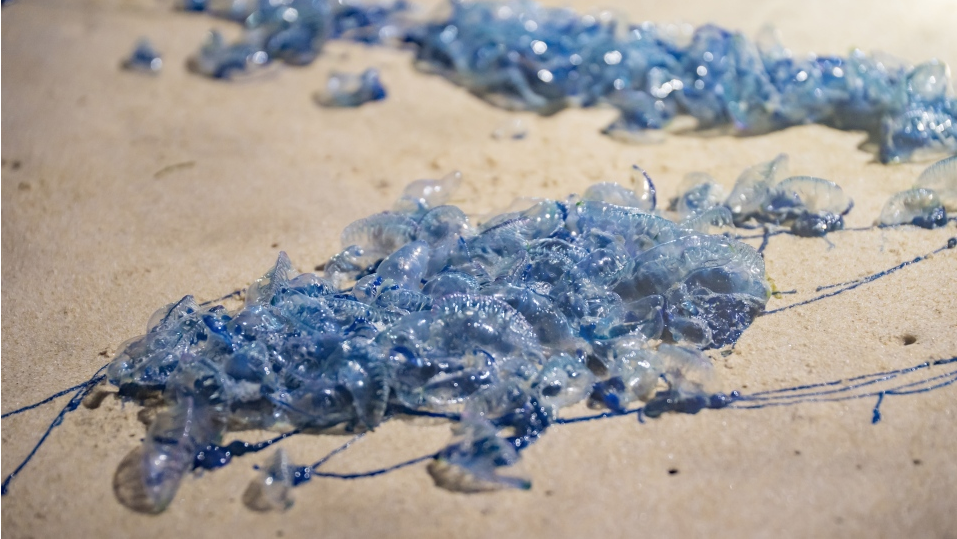 Jellyfish! The Next King of the Sea; as the world’s oceans are degraded they are being dominated by jellyfish

Jellyfish have stung more than 22,000 beachgoers on Australia's Gold and Sunshine coasts, prompting officials to issue warnings and close beaches.
Safety authority Surf Life Saving Queensland said the bluebottle jellyfish -- also known as Pacific man-of-war -- have been blown in by recent winds.
The surge in jellyfish numbers coincided with a busy period on Queensland beaches, with Christmas, the New Year and the school holidays bringing people to the coast.
Cameron Ward with Surf Life told CTVNews.ca since the beginning of December, more than four million people have flocked to Queensland beaches.
"Unfortunately, an influx of swimmers coupled with an influx of bluebottles has led to a sharp increase in the number of stings," Ward said.
Since Dec. 1, there have been more than 22,000 people stung by bluebottles.
Last year, only 6,800 people were stung over the same period.
And an average year sees about 10,000 people stung by bluebottles.
Bluebottle stings are painful, but they aren't deadly - unlike another jellyfish that's also causing problems at east Australian beaches.
The Queensland Ambulance Service said it has been responding to a higher-than-average number of suspected Irukandji stings.
Irukandji jellyfish are both smaller and deadlier than bluebottle jellyfish.
They're one of the smallest jellyfish, at roughly one cubic centimetre.
And they're one of the most poisonous in the world, able to fire their venomous stingers at victims triggering Irukandji syndrome.
Irukandji syndrome incudes painful muscle cramps, back and kidney pain, a sensation of skin burning, nausea, restlessness, and panic.
If untreated, it can be fatal, though only two Australians are believed to have been killed since 2002. Experts have said recent rain, along with the wind, has warmed the waters off the popular east coast of Australia, leading to the southern migration of Irukandji from the north.
The news media have tried out various names for this new plague: “the jellyfish typhoon,” “the rise of slime,” “the spineless menace.” Nobody knows exactly what’s behind it, but there’s a queasy sense among scientists that jellyfish just might be avengers from the deep, repaying all the insults we’ve heaped on the world’s oceans.