A massive "Atmospheric River" is set to dump nearly 10 feet, 3 metres of snow and nearly 2 months rain in 2 days on California 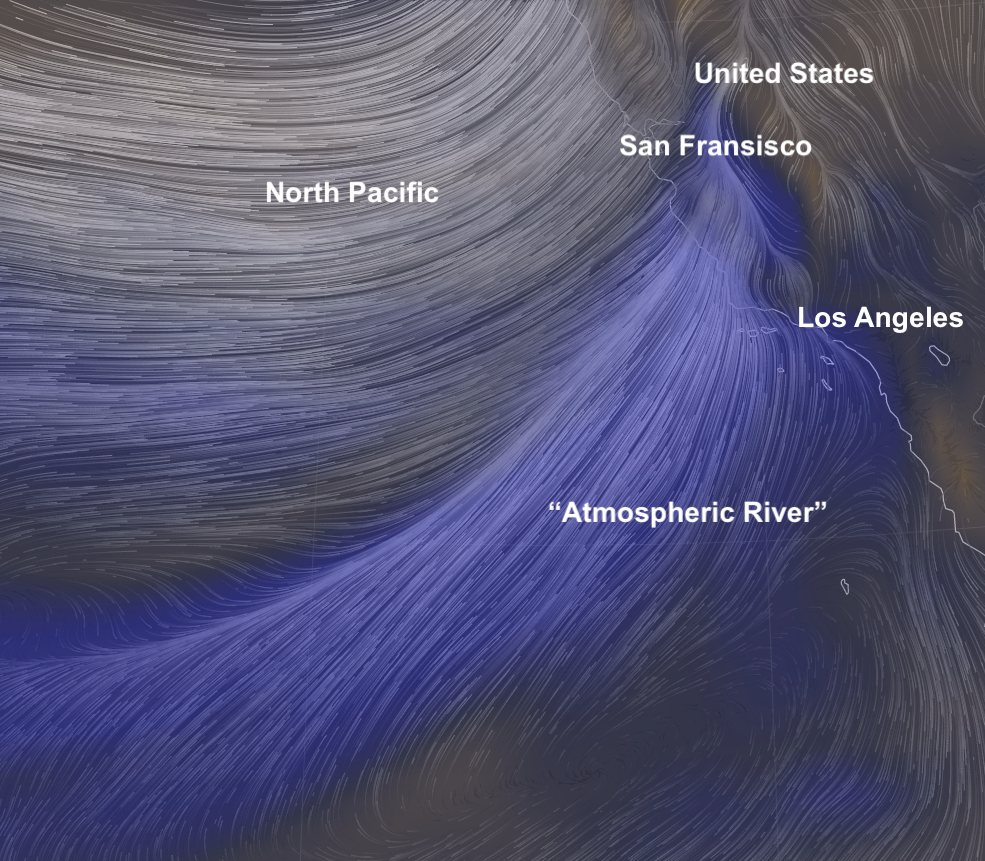 A massive "Atmospheric River" is set to dump nearly 10 feet, 3 metres of snow in California’s Sierra Nevada mountains and several inches of rain elsewhere in the state on Wednesday and Thursday, compounding the flood risk after earlier rainstorms blew through the state.
“The big one is rolling in late morning today, that’s for darn sure,” said meteorologist David Roth with the National Weather Service’s Weather Prediction Center in College Park, Maryland.
Police in Los Angeles and Santa Barbara counties ordered evacuations Tuesday from areas damaged by last year’s wildfires because of the risk heavy rain would trigger mud and debris flows on charred hillsides.
According to Reuters, significant road closures and travel delays were possible in the Los Angeles area given risks of flash flooding and rockslides, the NWS reported.
An earlier storm moved over Southern California on Tuesday, with about 2 inches of rain in parts of Los Angeles and Ventura Counties and up to 4.5 inches in the Santa Monica Mountains, the NWS reported.
The new storm brewing out at sea will probably bring areas north of Santa Barbara up to 3 inches (7.6 cm) of rain.
As much as seven feet of snow was possible over 6,000 feet (1,829 meters) in the Sierra Nevada mountains.
The weather is a boon for California’s farmers and ski areas, given most of the state is recovering from years of drought, according to the United States Drought Monitor.
The wild weather is the result of moisture-laden winds from the Pacific known as “atmospheric rivers.”
The first storm will reach the U.S. Midwest and Northeast on Thursday and Friday, gathering more moisture from the Gulf of Mexico.
The second storm will hit the central and eastern United States through the weekend, forecasters said.
More than a month’s worth of rain could hit the Los Angeles area over 2 days, AccuWeather forecasts Following one round of rain and mountain snow on Tuesday, an even larger storm system will further raise the risk of flooding, mudslides and avalanches from Wednesday into Thursday.
Los Angeles received over 1.75 inches of rain on Monday and Tuesday, and San Diego picked up just over 0.55 of an inch of rain.
AccuWeather meteorologists are forecasting that the Los Angeles basin could receive 2-4 more inches of rain beginning Wednesday night and lasting into Thursday night, bringing the potential total up to 5 or more inches.
The average rainfall for that area in January is 3.12 inches.