“It smells like pure crap.” The stench is unbearable: The ocean is brown and you can’t swim! Florida algae bloom is a disaster 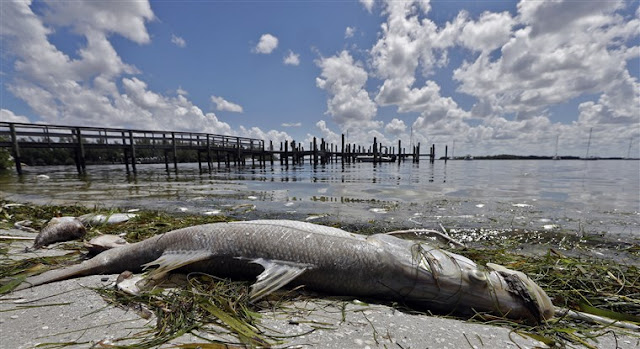 Photo NBCNEWS
The fish just keep on dying in Florida...
Dead crabs, fish and other sea life litter the sands.
The stench is unbearable
The ocean is brown and you can’t swim.
There’s not a soul in the water.
The Florida paradise we know and love is ruined, it may never recover.
According to The Miami Herald, Naples beaches are known as some of the state’s best for their tidy white sands and pristine waters, but the toll of the toxic red tide invasion is relentless.
No, the environmental disaster that appeared last fall — and kept us away all summer — hasn’t gone away even though your friends may be posting on social media pretty sunset pictures.
The ocean waters are pools of dark brown muck.
You sit on the sand, and soon enough, you start to have trouble breathing.
The kids try to play, sneezing, and with red eyes.
Further north and inland a sewage spill from a Florida wastewater plant during Hurricane Michael into a river feeding environmentally fragile Apalachicola Bay is suspected of causing mass fish kills downstream, state officials said on Thursday.
Experts say the discharge of 80,000 gallons of partially treated sewage into the Apalachicola River marks the latest blow to a once-productive estuary struggling to recover from an earlier collapse of its oyster and fishing industry.
The discharge came from a sewage plant in Wewahitchka, about 80 miles east of Tallahassee.
“It’s heartbreaking,” said Shannon Hartsfield, a fourth-generation oysterman who is head of the Franklin County Seafood Workers Association, of the spill.
Hartsfield told Reuters he had seen thousands of dead fish in the river about 20 miles downstream from the site of the spill.
On the waterfront in the town of Apalachicola, at the mouth of the river, the stench of sewage in the air was strong on Thursday.
Apalachicola Bay and the estuary system surrounding it once produced 10 per cent of the U.S. oyster catch and 90 per cent of Florida’s harvest, along with abundant harvests of shrimp, crab and fish.
Michael Dasher, a fishing boat captain, said he first noticed sewage in the bay late Wednesday afternoon.
“It was horrible down here. You could hardly breathe,” he told Reuters.
“It smells like pure crap.”
The stricken fish species included flounder, bass, bream, catfish and bluegill, she said.