When will they learn? A powerful mag 6.7 earthquake paralysed the northern island of Hokkaido Japan knocking out Tomari nuclear plant 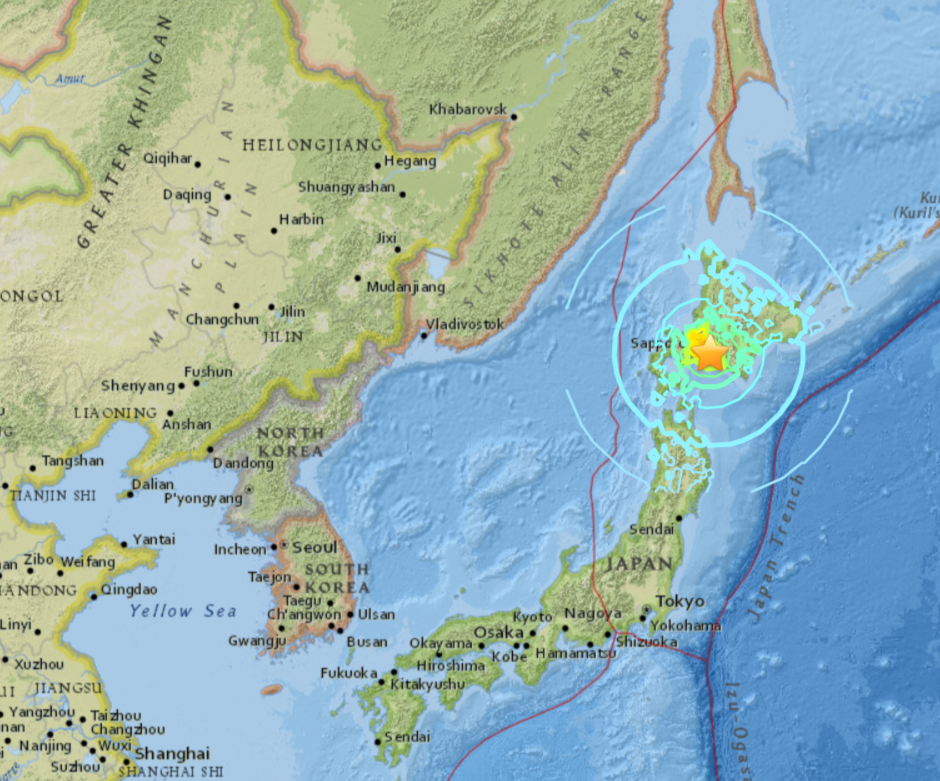 USGS
At least one person was killed and 32 were missing, Japanese media reported, after a powerful earthquake paralysed the northern island of Hokkaido on Thursday, triggering landslides and knocking out power to its 5.3 million residents.
Public broadcaster NHK reported the first confirmed fatality and said 120 people had also been injured after the 6.7-magnitude quake.
Aerial footage showed dozens of landslides exposing barren hillsides near the town of Atsuma in southern Hokkaido, with mounds of reddish earth and fallen trees piled up at the edge of green fields. The collapsed remains of what appeared to be houses or barns were scattered about.
Prime Minister Shinzo Abe said that 25,000 troops and other personnel were being dispatched to the area to help with rescue operations.
National broadcaster NHK showed the moment the quake struck the city of Muroran, with its camera violently shaking and all city lights going black moment later.
In Sapporo, a mudslide on a road left several cars half buried.
Akira Fukui, from the main city of Sapporo, told AFP: "I woke up around 3am with a vertical jolt.
I put the light on but it went out shortly afterwards.
All the traffic lights are out and there's no power at work."
Another Sapporo resident told NHK: "I was scared... I felt the tremor, which lasted for about 30 seconds.
I was on the sixth floor, it was really scary."
The entire island was without power after Hokkaido Electric Power Co said it conducted an emergency shutdown of all its fossil fuel-fired power plants following the quake.
The utility said it wasn't clear when electricity would be restored to 2.95 million households.
The trade and industry ministry told the utility to restart the coal-fired Tomato-Atsuma power plant within a few hours, Trade Minister Hiroshige Seko said.
All trains across the island were also halted.
Roof tiles and water could be seen on the floor at Hokkaido's main airport, New Chitose Airport, which would be closed for at least Thursday.
New Chitose is a major tourist gateway to the island, known for its mountains, lakes and abundant farmland and seafood, and more than 200 flights and 40,000 passengers would be affected, Kyodo News Agency said.
The closure comes just a couple days after Kansai Airport, an important hub for companies exporting semiconductors near Osaka, in western Japan, was shut after it was hit by Typhoon Jebi. Prime Minister Shinzo Abe said officials hoped to reopen Kansai Airport for domestic flights on Friday.
The quake, which hit at 3.08am, posed no tsunami risk, the Japan Meteorological Agency said.
The US Geological Survey said it struck some 42 miles southeast of Sapporo, Hokkaido's main city. It registered a strong 6 on Japan's 7-point earthquake scale.
Mr Abe arrived at his office before 6 am and told reporters his government had set up a command centre to coordinate relief and rescue. Sounding haggard, Mr Abe said saving lives was his government's top priority.
The Tomari Nuclear Power Station, which has been shut since a 2011 earthquake and tsunami, suffered a power outage but was cooling its fuel rods safely with emergency power, said Chief Cabinet Secretary Yoshihide Suga. Operator Hokkaido Electric reported no radiation irregularities at the plant, Suga told a news conference.
Farming and tourism are two of the island's biggest economic drivers, but there is some industry. Kirin Beer and Sapporo Beer both said factories were shut by the power outage, although they said no structural damage was found.
A fire broke out at a Mitsubishi Steel Mfg Co plant in the city of Muroran after the quake but was mostly extinguished with no injuries, a company official said.
A series of smaller shocks, including one with a magnitude of 5.4, followed the initial quake, Japan's Meteorological Agency said.
Agency official Toshiyuki Matsumori warned residents to take precautions for potential major aftershocks in coming days.
"Large quakes often occur, especially within two to three days (of a big one)," said Toshiyuki Matsumori, in charge of monitoring earthquakes and tsunamis at the meteorological agency.
He added the risk of housing collapses and landslides had increased in the area hit by the quake, saying: "We urge residents to pay full attention to seismic activity and rainfall and not to go into dangerous areas."
The 2011 earthquake and tsunami in northern Japan destroyed both external and backup power to the Fukushima Dai-ichi nuclear plant, causing meltdowns.
The earthquake also affected telephone service and television broadcasting in Sapporo.
A Japanese nuclear energy station is relying on emergency back up power after a powerful earthquake knocked out electricity on the northern island of Hokkaido on Thursday, a stark reminder of the Fukushima disaster more than seven years ago.
The three-reactor Tomari nuclear plant, operated by Hokkaido Electric Power (9509.T) and in shutdown since the aftermath of the Fukushima disaster, lost power after a magnitude 6.7 quake hit the island in the early hours, the government said.