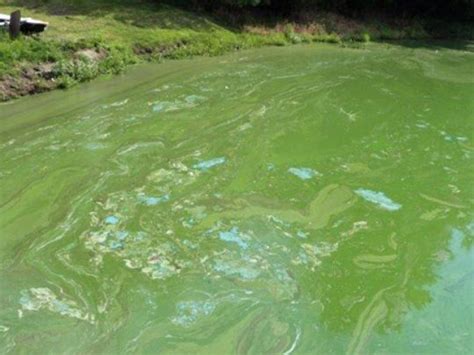 Toxic blue-green algae was found in record levels in Southampton's Lake Agawam earlier this month, capping a summer during which a dozen South Fork lakes and ponds were closed due to high levels of the harmful bacteria.
The lake, the centrepiece of Southampton Village, registered 76,000 micrograms of blue-green pigment per litre on Sept. 12 - thousands of times higher than the state Department of Environmental Conservation standard of 25 micrograms of blue-green pigment per litre, said Chris Gobler, Stony Brook University School of Marine and Atmospheric Sciences professor.
He described the sample pulled from the lake on that day as being "more solid than liquid."
The previous record was 10,000 micrograms per litre, recorded just a week earlier in the same lake, Gobler added.
"Lake Agawam has been above that [DEC] level since we began sampling in May, but this past month, particularly in September, the levels we saw were the highest we've ever seen on Long Island," said Gobler, who continuously sampled between 30 and 40 freshwater bodies in Suffolk and Nassau counties this past summer.
Excessive nitrogen has fueled a "crisis" of water quality problems in Long Island estuaries this summer, Gobler said Tuesday during a news conference in Patchogue.
The region also faced the most widespread rust tide bloom in Long Island history, resulting in the deaths of thousands of oysters and fish in Southampton.
Blue-green algae, also known as cyanobacteria, thrives in warm, nutrient-rich still water.
The algae species in Lake Agawam emits a toxin known as microcystin that can cause breathing, digestive and liver problems, or even death.
"It has a characteristic pea soup appearance," said Stony Brook research support specialist Jennifer Jankowiak.
"You can see it floats to the surface and forms streaks."
The following week's readings were much lower after temperatures dropped.
On Sept. 18, a Lake Agawam sample detected 35 micrograms of blue-green pigment per litre, a level still above the DEC threshold, Gobler said.
Of the 62 counties in New York State, 47 had algal blooms this year, with the most occurring in Suffolk County, Gobler said.
Of the 12 active Suffolk County blooms listed by the DEC as of Monday, eight were on the South Fork, where there is a cluster of shallow freshwater bodies from Southampton to Montauk's Fort Pond.
A reason for the high algae readings in Lake Agawam is that much of the Southampton Village's stormwater runoff leads to the lake, which functions like a sump.
The village is also not on a sewer system and nitrogen from ageing septic systems makes its way into the lake, feeding the bacteria.
Southampton Town Trustee president Ed Warner Jr. said the town has encouraged surrounding property owners to install natural buffers, but said the region ultimately needs a long-term wastewater and stormwater management plan to address the issue.
"The waters are the economic engine of the town out here," Warner said.
"Each time we get a blue-green algae closure, I recognize it as losing what the tourists come out here for."