Meteorologist described loss of ice as "scary": The oldest and thickest sea ice in the Arctic has started to break up for the first time ever 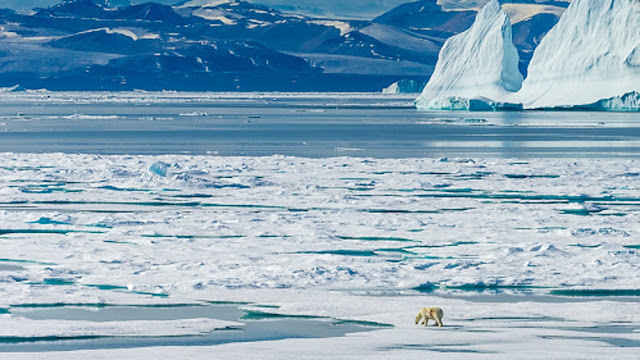 Photo aljazeera.com
The oldest and thickest sea ice in the Arctic has started to break up, opening waters north of Greenland that are normally frozen, even in summer.
This phenomenon - which has never been recorded before - has occurred twice this year due to warm winds and a climate-change-driven heatwave in the northern hemisphere.
One meteorologist described the loss of ice as "scary".
Others said it could force scientists to revise their theories about which part of the Arctic will withstand warming the longest.
The sea off the north coast of Greenland is normally so frozen that it was referred to, until recently, as "the last ice area" because it was assumed that this would be the final northern holdout against the melting effects of a hotter planet.
But abnormal temperature spikes in February and earlier this month have left it vulnerable to winds, which have pushed the ice further away from the coast than at any time since satellite records began in the 1970s.
"Almost all of the ice to the north of Greenland is quite shattered and broken up and therefore more mobile," said Ruth Mottram of the Danish Meteorological Institute.
"Open water off the north coast of Greenland is unusual.
This area has often been called 'the last ice area' as it has been suggested that the last perennial sea ice in the Arctic will occur here.
The events of the last week suggest that, actually, the last ice area may be further west."
Ice to the north of Greenland is usually particularly compacted due to the Transpolar Drift Stream, one of two major weather patterns that push ice from Siberia across the Arctic to the coastline, where it packs.
Walt Meier, a senior research scientist at the US National Snow and Ice Data Center, said: "The ice there has nowhere else to go so it piles up.
On average, it's over four metres thick and can be piled up into ridges 20 metres thick or more.
This thick, compacted ice is generally not easily moved around.
"However, that was not the case this past winter (in February and March) and now.
The ice is being pushed away from the coast by the winds."
He said this would flush chunks of thicker ice out through the Fram or Nares Straits into warmer southern waters.
"I cannot tell how long this open water patch will remain open, but even if it closes in few days from now, the harm will be done: the thick old sea ice will have been pushed away from the coast, to an area where it will melt more easily," he added.
This year's openings are driven more by wind than melting but they have occurred during two temperature spikes.
In February, the Kap Morris Jesup weather station in the region is usually below -20C, but earlier this year there were 10 days above freezing and warm winds, which unlocked the ice from the coast.
Last week, the crack opened again after Kap Morris Jesup briefly registered a record high of 17C and strong southerly winds picked up to 11 knots.
Experts predict that coastal seas will freeze again but probably later than normal.
"I think that solar heating of the water column will increase during this opening and this will delay freeze-up and ice formation," said Rasmus Tage Tonboe, a sea ice expert at the the Danish Meteorological Institute.
The latest readings by the Norwegian Ice Service show that Arctic ice cover in the Svalbard area this week is 40% below the average for this time of year since 1981.
In the past month, at least 14 days in the past month have hit record lows in this region.
Although thinner ice elsewhere in the Arctic means this is unlikely to be a record low year overall, they are in line with predictions that there will be no summer ice in the Arctic Ocean at some point between 2030 and 2050.
Keld Qvistgaard, the ice service coordinator in Denmark, said this was not the first time a gap had appeared between the shore and the main ice pack but the one formed from 1 to 5 August was different in its extent.
"This event is a pretty big one going all the way to west of Kap Morris Jesup.
This is unusual," he said.
As well as reducing ice cover, the ocean intrusion raises concerns of feedbacks, which could tip the Earth towards a hothouse state. Freakish Arctic temperatures have alarmed climate scientists since the beginning of the year.
During the sunless winter, a heatwave raised concerns that the polar vortex may be eroding.
This includes the Gulf Stream, which is at its weakest level in 1,600 years due to melting Greenland ice and ocean warming.
With lower circulation of water and air, weather systems tend to linger longer.
A dormant hot front has been blamed for record temperatures in Lapland and forest fires in Siberia, much of Scandinavia and elsewhere in the Arctic circle.