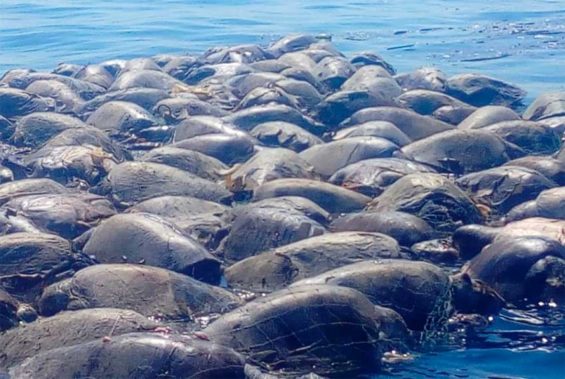 Photo mexiconewsdaily.com
Hundreds of endangered olive ridley sea turtles have been found dead off the coast of Mexico.
Local fishermen in the southern Mexican state of Oaxaca have found about 300 dead sea turtles entangled in fishing nets although it's not sure if the turtles died in the nets or got tangled up later.
The find comes just days after another 102 olive ridley turtles were found dead in neighbouring Chiapas state.
The Olive Ridley turtles are a struggling species and are considered to be facing a high risk of extinction in the wild.
According to the BBC, it is not clear whether they got caught in the nets while still alive or were already dead when they became entangled.
The olive ridley turtles come to Mexico's Pacific beaches to lay their eggs
Experts say they could have been killed by harmful algae, fish hooks or could have suffocated while trapped in the nets.
Mexico banned the capture of sea turtles in 1990 and there are stiff penalties for anyone killing them.
A specialised federal attorney is investigating the case.