Sweden is the latest country to join the global heatwave temperatures are expected to reach 30C or more five days in a row "very unusual!" 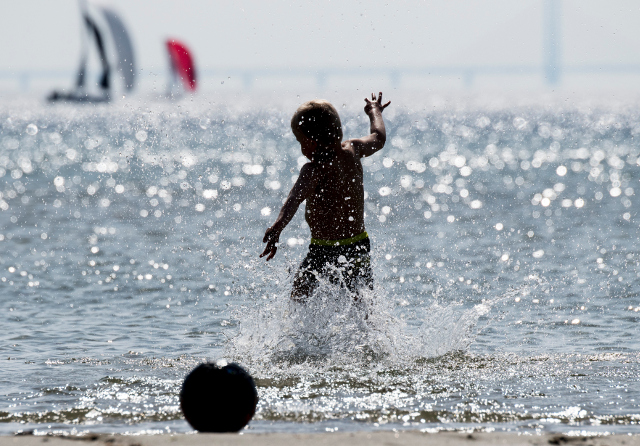 Photo thelocal.se
Sweden is the latest country to join the increasingly long list of countries in the grip of crippling heatwaves.
And it will be the second of their summer after a long heatwave at the end of May.
The heatwave in Sweden is getting so bad that the country has now sent out official warnings about "extremely high temperatures" in several areas, including Stockholm and Uppsala.
Sweden's national weather agency SMHI on Sunday issued a class-two alert for "extremely high temperatures" (the most serious temperature warning) in counties in central parts of the country: Orebro, Västmanland, Sodermanland, Uppsala and Stockholm.
The warning means that temperatures are expected to reach 30C or more five days in a row.
"It is the first time since 2014 we are issuing this warning," meteorologist Linus Dock told news agency TT.
"You could say it's unusual.
It is a relatively new warning category which was developed in 2011."
While many of The Local's readers may be from countries where such temperatures are par for the course in summer, it is unusual for the mercury to climb - and stay - that high in Sweden.
Uppsala Council said it had made sure that its care homes for the elderly all had air conditioning and fans helping to keep any of its vulnerable residents cool during the heatwave, and Stockholm said it was prepared but had not yet heard of any major incidents connected to the heat.
Authorities did, however, urge people to respect barbecue bans currently in place in large parts of Sweden and avoid lighting fires altogether.
Nearly all of Sweden is currently considered a risk zone for forest fires, and firefighters have already been called out on several occasions.

Recently the Northern Hemisphere, indeed the planet has been in the grip of an unprecedented heat wave from Canada to Australia, all listed below
Africa's hottest recorded temperature ever was recorded was in 1931 when the mercury reached 55 deg C (131 deg F) in Kibili Tunisia, however, The BBC claim that record could be unreliable according to scientists.
On July the 5th some experts are claiming Africa's hottest temperature was reached when the mercury hit an incredible 51.3 deg C, (124.3 deg F) Ouargla in Algeria.
So why did this happen?
The BBC's environment correspondent Matt McGrath writes: "In common with many parts of the world, Algeria has seen a significant rise in heat waves over the past 30 years that experts say is down to rising global temperatures.
"According to one study, the frequency of heat waves lasting three days or longer has more than doubled between 1988 and 2015.
Earlier this year Pakistan experienced the world's hottest April day on record, with temperatures peaking at 122.4F (50.2C).
Meanwhile, after being sunless for 5 months much of the entire Arctic was abnormally warm around the same time.
The temperature averaged over the whole region appears to be the warmest on record for that time of year, dating back to at least 1958.
Coming back to July, cities across  Eastern Canada suffered a deadly heat wave, with at least 70 deaths attributed to the record hot spell in Quebec province alone.
In Canada's capital Ottawa, in Ontario, the humidity index - the method used there to measure the combined humidity level and temperature - hit 47C (116.6F) on 2 July.
According to BBC Weather's Ben Rich: "The jet stream has shifted further north than usual, allowing a plume of very warm air to waft northwards across the USA and into large parts of Canada.
There was also less rainfall than normal during May and June - and dry ground heats up more quickly, so temperatures have been able to rise well above average."
Record after record fell in southern parts of California last week:
Downtown Los Angeles had its hottest July night in history, with a minimum of 26.1C (79F) on 7 July
Chino, outside LA, saw its hottest-ever temperature - 48.9C (120F)
The temperature at University of California, Los Angeles, hit 43.9C (111F), breaking a 79-year-old record
The heat also caused much health concern with breathing problems and asthma attacks from bushfires.
In essence, it's the same problem that has affected eastern Canada.
So is this down to climate change?
It's hard to pin it on that and only that, according to the World Meteorological Organization (WMO).
Australia bakes in the summer but it's the middle of the winter there now, however, they have not escaped the heat, last week, the temperature in Sydney topped 24.7C (76.5F) over two days in July for the first time since records began.
That's roughly eight Celsius higher than the average temperature for this time of year.
This comes after most parts of the city recorded their hottest-ever autumn.
According to Ben Rich: "Temperatures rose during early July as an area of high pressure settled to the east of Australia, bringing warm northwesterly winds from the Equator down across the eastern side of Australia.
The whole Caucasus region, a mountainous area on the border of Europe and Asia, has suffered particularly high temperatures this month.
The capital of Georgia, Tbilisi, hit an all-time high of 40.5C (104.9F) on 4 July, but the heat has put a significant strain on (often ageing) power grids in other countries nearby.
Nearby, there have been major power cuts in Iran because demand outstripped the electrical system's capabilities as people try to stay cool.
The government there has urged people to conserve energy wherever possible.
In Europe, it's the same with parts of south-west France hitting 40 deg C (104 deg F)
The UK and Ireland have seen the hottest summer they have had since 1976 and here in Holland where I am based, it hasn't rained for nearly two months with temperatures often above 30 deg C.
At the beginning of June, a heat wave in Mexico increased temperatures to 50 C (122 F) in many areas and led authorities to declare a state of emergency, the country's National Weather Service (SMN).
According to the SMN, temperatures rose to 50 C in the northern state of Sinaloa, the western state of Michoacan and the central state of Hidalgo, while temperatures in the rest of the country exceeded 30 C (113 F).