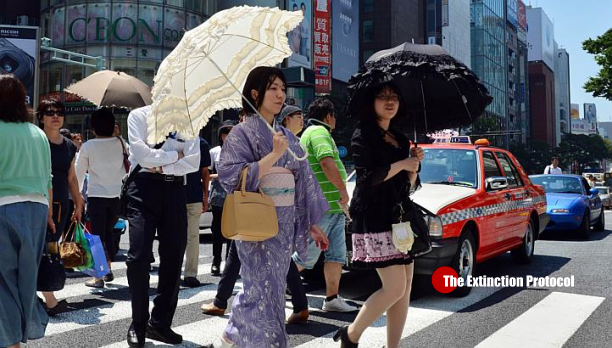 Photo theextinctionprotocol.wordpress.com
South Korea is the latest country to join the global heat wave party.
South Korea's highest-ever morning low was recorded in the city of Gangneung, where the temperature was 31°C at 6.45am.
The morning low in Seoul was 29.2° C, a record for the country's capital, according to South Korea's weather agency.
The mercury hit 40 deg°C (104 deg F) in the south-eastern town of Hayang, the highest temperature in the country so far this year.
Meanwhile, an "unprecedented" heatwave in Japan has killed at least 65 people in one week, government officials said Tuesday, with the weather agency now classifying the record-breaking weather as a "natural disaster."
In the week to Sunday at least 65 people died of heat stroke while 22,647 people were hospitalised, the Fire and Disaster Management Agency said in a statement.
The Fire and Disaster Management Agency said Tuesday that a total of 80 people have died from the heat since the beginning of July, and over 35,000 have been hospitalised.