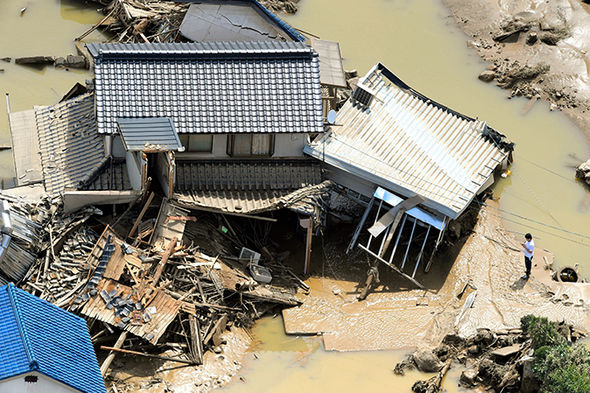 Photo credit express.co.uk
A heat wave had killed at least six people and hospitalized more than 1,500 others across the nation Saturday as a three-day weekend got underway, a Kyodo News tally showed.
The deaths occurred in six prefectures: Toyama, Shizuoka, Tottori, Hiroshima, Oita and Kumamoto, which saw temperatures between 33.5 and 37.4. Elsewhere, Kyoto, Gifu and Mie prefectures saw the mercury top 38.
Osaka led the way with 156 people hospitalized for heat exhaustion, followed by 125 in Aichi and 102 in Chiba and Tokyo.
In Shizuoka, a man in his 90s who was found lying outside his home was confirmed dead at a hospital.
Another senior, 86, died at a hospital after collapsing near his home.
In Okayama, where more than 1,000 volunteers showed up to help clean up flooded houses and remove debris caused by torrential rain and mudslides, at least 48 people were treated for heat-related maladies.
Of the Meteorological Agency's 927 observation points nationwide, 613 logged highs of at least 30, and 161 logged temperatures over 35.
The agency warned that temperatures will remain high throughout the week.
The heat-wave is also hampering rescue efforts after almost half a year's rain fell in Japan in just ten days this month.
Nearly ten million people were ordered to leave their homes.
Almost 10,000 are people are in shelters, according to the Fire and Disaster Management Agency.
More than 200 people have died with dozens still missing.
More than 250,000 people are without water.
70,000 rescuers continue the search for missing people.
Aid supplies and volunteers have been arriving in affected areas, although a local official in Kurashiki, Okayama Prefecture, said there are “not enough people or vehicles” to distribute the abundant supplies.
According to Gaijingpot.com, the devastating torrential rains and subsequent flooding and landslides in western Japan — Hiroshima, Okayama, Ehime, Kyoto, Fukuoka, Yamaguchi, Kagoshima, Hyogo, Gifu, Shiga, Kochi, Saga — have left at least 200 people dead so far with rescuers still searching for dozens more.
According to JapanToday.com, communities that grappled with rising floodwaters last week now find themselves battling scorching summer temperatures well above 30 degrees Celsius, as foul-smelling garbage piles up in mud-splattered streets.
"We need the water supply back," said Hiroshi Oka, 40, a resident helping to clean up the Mabi district in one of the hardest-hit areas, the city of Kurashiki, Okayama Prefecture, where more than 200,000 households have gone without water for a week.
The soaring temperatures have fuelled concern that residents, many still in temporary evacuation centres, may suffer heat strokes or illness as hygiene levels deteriorate.