Disaster unfolding as more than 120,000 people have been forced to flee their homes after days of torrential rain in Myanmar 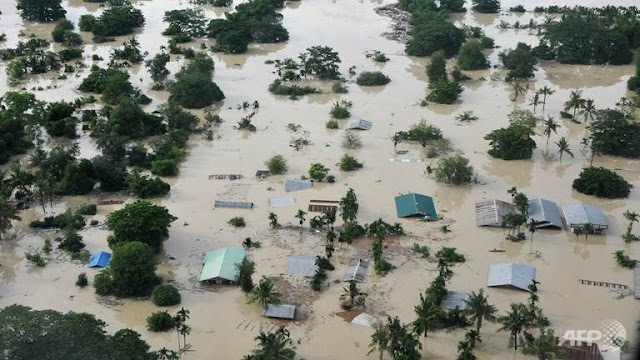 Ten people have been killed and more than 120,000 have been forced to flee their homes after days of heavy monsoon rains flooded villages in central and southern Myanmar, according to government officials.
The Burmese National Disaster Management Committee has urged residents near river banks and low-lying areas to move to higher ground after floods shut down roads and submerged villages, leaving communities stranded.
As of Tuesday, more than 120,000 people across five provinces had been displaced by rising waters, with Magway Region in central Myanmar particularly hard hit, with more than 70,000 affected, said Min Thein, director of Myanmar's Department of Disaster Management.
Images released by Myanmar's Ministry of Information show rescue boats evacuating people, while children and families cling to rooftops to escape rising water levels.
However, attempts to reach many of those affected have been hampered by heavy rains.
Three of the ten people killed in the floods have been soldiers aiding in the rescue effort, said Thein. On Sunday, the United Nations Resident and Humanitarian Coordinator's office in Myanmar said that they were following the devastation "with great concern."
"The UN in Myanmar is mobilizing its partners, resources and capacity and is offering to provide support to the ongoing assistance delivered to the victims of the floods by the Government of Myanmar, civil society organizations, volunteers and other partners," said the organization in a statement.
Many of those displaced have been relocated to temporary shelters, with both monasteries and cyclone shelters opening their doors to families, according to the National Disaster Management Committee (NDMC). Additional shelters would be opened for pregnant women and women with young children, said the Committee.