NOAA: U.S. smashes a 124-year warm record for May after Warm records also smashed in the UK, Western Europe and Scandinavia 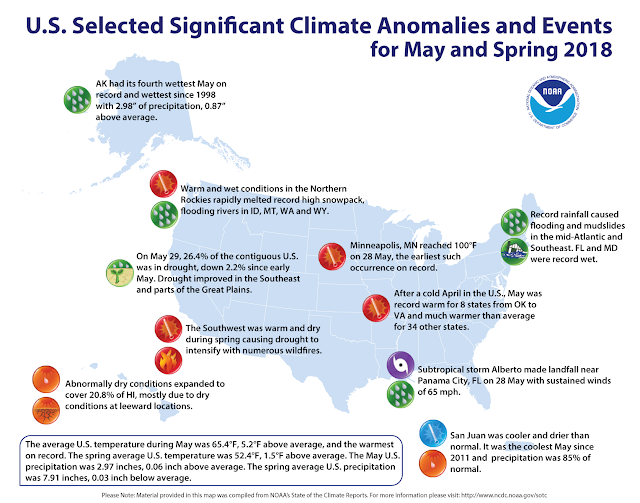 An annotated map of the U.S. showing other climate events that occurred in May 2018. For details, see the bulleted list below in our story. (NOAA/NCEI). Click image to enlarge.

After warm and sunshine records were smashed for May in the UK, Western Europe and Scandinavia, the U.S. had its warmest May on record too according to NOAA's monthly national weather report.
Each state was warmer than average, with record precipitation in the East.
This comes after people were left asking, "what happened to spring?" As the U.S. had its coldest April in more than 20 years, with record- cold temperatures from the Northern Plains to Gulf Coast.

Below is how May 2018 and spring fared in terms of the climate record in the U.S.

May 2018
The average May temperature across the contiguous U.S. was 65.4 degrees F, 5.2 degrees above average, making it the warmest May in the 124-year record, according to scientists at NOAA’s National Centers for Environmental Information.
This surpassed the previous record of 64.7°F set in 1934, during the dust bowl era.
There were more than 8,590 daily warm station records broken, or tied, in May.

The average precipitation for May was 2.97 inches (0.06 inch above average), which ranked near the middle of the record books.
Two weather systems, including  Subtropical Storm Alberto, helped bring record and near-record rain across the Southeast and Mid-Atlantic. Meanwhile, more than a quarter of the contiguous U.S. remained in drought.

Year to Date I Meteorological Spring (March-May)
The average U.S. temperature for the year to date (January through May) was 45 degrees F, 1.6 degrees above normal and the 21st warmest on record.
The average temperature for the contiguous U.S. during Meteorological Spring (March through May) was 52.4 degrees, 1.5 degrees above average and ranked as the 22nd warmest on record.

Subtropical Storm Alberto: Three days before the official start of hurricane season, Alberto made landfall along the panhandle of Florida, packing 65 mph winds and bringing torrential rain to parts of the South.

Temperature spike: Record warmth was observed in parts of the Northwest and stretching from the Southern Plains through the Midwest and into the Mid-Atlantic. On May 28, Minneapolis, Minn., hit 100 degrees F – the earliest on record it got that hot.

Cool, dry Puerto Rico: San Juan was cooler and drier than normal.
It was the coolest May since 2011 and precipitation was 85 per cent of normal.


Crazy May! Warm and sunshine records SMASHED in the UK, Western Europe and Scandinavia while the Mediterranean was cool and wet 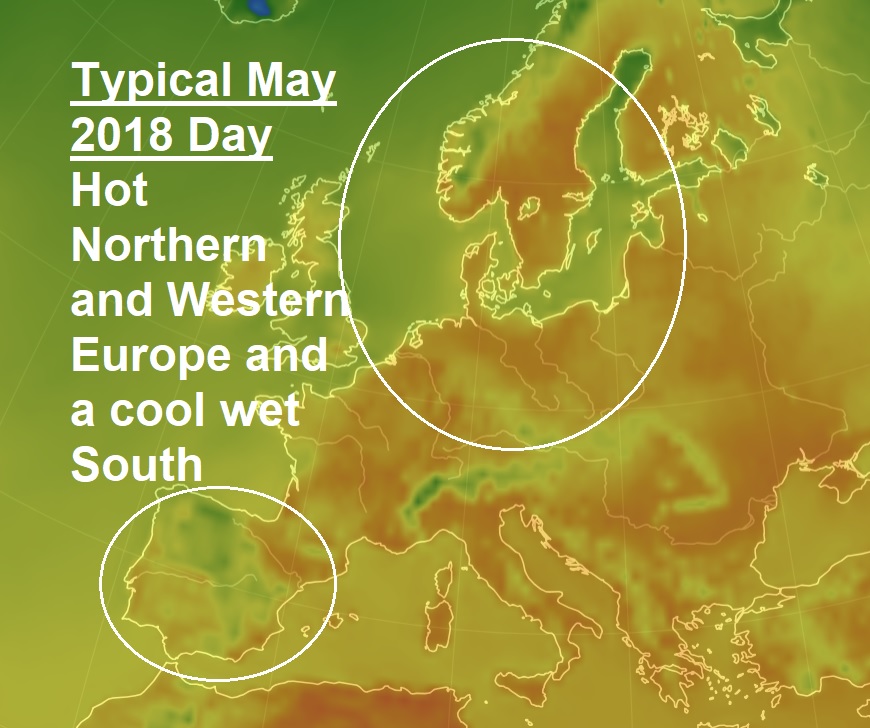 UPSIDE DOWN WEATHER IN MAY: Map Earthwindmap
Warm and sunshine records were smashed for May in the UK, Western Europe and Scandinavia as the area enjoyed many warm dry days with many areas enjoying tropical temperatures for days on end after a chilly start to the month.
The Dutch Met Office KNMI claimed May 2018 was the warmest month of May in three centuries, it was the warmest May since 1706 with almost half the month recording days of 25 deg C, (77 deg F) the highest number since 1901.
The UK Met Office claimed increased sunshine during May 2018 helped to make it a record-breaking May for daily maximum temperature and sunshine across the UK.
The provisional average daily maximum temperature was 17.0 °C during May 2018 making it the warmest May in the UK in a series of records stretching back to 1910.
With 245.3 hours of sunshine, May 2018 was also the sunniest May with the record stretching back to 1929.
Tim Legg, of the Met Office National Climate Information Centre, said: “Increased sunshine during the month has helped to keep daytime temperatures high, leading to it being the warmest May since records began in 1910.
It is also likely to be the sunniest May since 1929 too.”
Records of warmth and sunshine in Sweden, Denmark and Norway too.
From Denmark to Sweden and Norway, May 2018 was historic.
In Denmark, it was the sunniest and hottest May in the country since records began, with a monthly temperature deviation of 4.2 degrees (average temperature of 15.0 ° C). The capital city of Copenhagen registered a maximum temperature of 29.3 ° C (84.7 deg F) on 30 May, smashing the monthly record of 1886 (28.5 ° C).
In Norway, the threshold of 30 ° C (86 deg F) was regularly exceeded and a new monthly national record was set at Etne (32.7 ° C, 91 deg F, the previous record of 31.8 ° C at the end of May 2017).
Monthly records were also reported in Bergen and Oslo, with average monthly peak temperatures reaching 22.5 ° C, far ahead of a 70-year-old record (21.1 ° C in 1947).
New monthly records were also shattered in Sweden, such as in Gothenburg (31.1 ° C on 30 May).
The Mediterranean, however, which is usually warm in May was often less sunny.
For example, in May the average maximum temperature in Biarritz was 4 degrees lower than in Oslo, and that in Toulouse was 2 degrees cooler.
At the Luc (Var) station, the monthly sunshine was the lowest since records began, (35% of the deficit) with only 178 hours.
Home
at June 12, 2018