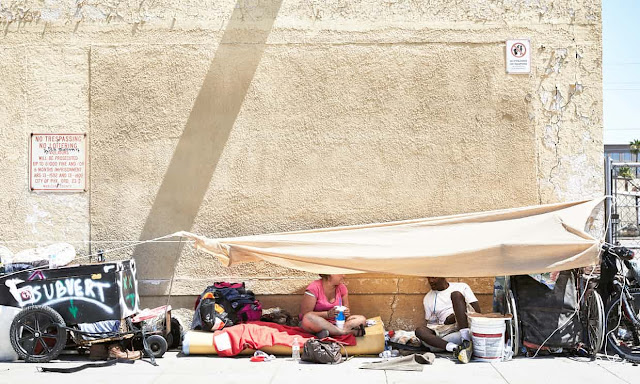 Photo Homeless people trying to stay out of the heat in Phoenix. Photograph: Stephen Denton for the Guardian
The National Weather Service declared an excessive heat warning for the Phoenix area for Sunday and Monday, reminding people to stay cool at the beginning of Arizona's dangerous summer season. The federal agency has also issued a similar warning for some desert areas of eastern California.
The forecast in the Arizona capital called for highs of 106 to 110 degrees F (43 deg C) both days, with lows in the 70s.
The metro Phoenix area, with some 5 million residents spread across the aptly named Valley of the Sun, experiences temperatures higher than 100 degrees most summer days.
The weather agency uses a complicated formula to declare an excessive heat warning, including close to record-breaking temperatures.
The official high Sunday was 108 degrees F, (42 deg C) the National Weather Service reported.
Weather service meteorologist Mark O' Malley said the current excessive heat warning was also issued for eastern desert areas of neighbouring California, including around Joshua Tree National Park and the cities of Palm Springs and El Centro.
"This is not uncommon, it isn't even a record for us," O'Malley said Sunday.
"But it is hot, 10 degrees above average.
"We have this every year, but every year we have lots of people succumb because of the heat," he added.
"It's a dangerous heat.
Take all the precautions, checking on your neighbours, and be smart out there."
Phoenix officials on Friday launched a safety campaign for Arizona's brutal summer season, calling on people in one of the hottest major U.S. cities to protect themselves from the extreme heat that can be deadly as temperatures regularly creep into triple digits.
The National Weather Service last week teamed up with the Arizona Department of Health Services and other government agencies to launch a heat awareness campaign.
"Periods of excessive and/or extreme heat are no joking matter," the weather service said on its website.
"Heat kills more people than tornadoes, floods, hurricanes, earthquakes and lightning combined."
On Sunday morning, Phoenix, Tempe, and Scottsdale firefighters were summoned to Camelback's Cholla Trail to help a 30-year-old woman suffering from heat-related issues.
The Phoenix Fire Department said when the first crew got there they found the woman in stable condition but then came across a man with moderate heat exhaustion who had to be transported to the hospital.