"To our knowledge no one has faced this before." Puna Geothermal Venture Plant compromised Monday exposing toxic and flammable gas Hawaii 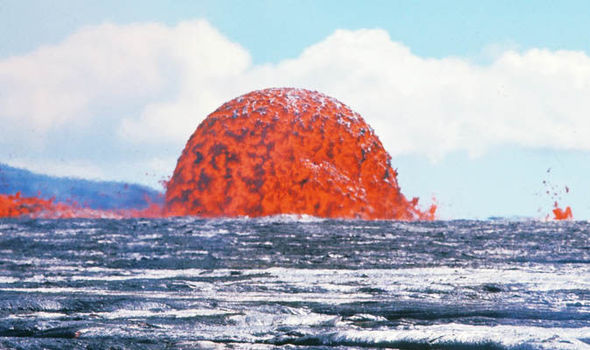 Photo express.co.uk
Authorities were scrambling to firm up contingency plans Tuesday as lava pouring from Hawaii's erupting Kilauea volcano slowly encroached on a power plant on the Big Island.
The lava flow entered the 800-acre property of the Puna Geothermal Venture Plant on Monday and had stalled at a swale about 300 yards from the nearest underground well.
On Tuesday, the lava was advancing.
"Fissure 6 reactivated last night and has been erupting since around midnight," Hawaii County civil defence officials said in a statement.
"The flows from Fissure 6 are slowly flowing closer to PGV property."
If lava breaches wells, authorities fear it could release hydrogen sulfide, a toxic and flammable gas. Most of the wells have been capped with thick steel plates.
Thomas Travis, an administrator of the Hawaii Emergency Management Agency, has warned that the intense heat could weaken the metal.
"That's why having lava flow across the well causes some uncertainties that have to be dealt with," he said.
"To our knowledge, no one has faced this before."
For residents in the area, uncertainty is the name of the game.
"It's different from a hurricane because a hurricane comes and goes," says Smiley Burrows, a Kapoho resident and caretaker of Green Mountain, a well-known Kapoho landmark encompassing 256 acres at the bottom of the lower East Rift Zone.
"Right now we're feeling safe and people are working together.
But it's an uncertainty we are dealing with on a daily basis and no one knows what's going to happen."
Kapoho residents like Smiley are keeping a wary eye on lava as it approaches the geothermal plant about five miles away.
But their main concern is water.
Lava consumed county water lines to Kapoho, as well as a second set of relocated water lines to the community.
Now Kapoho residents are receiving water from county water tankers and private resources.
For many residents, leaving the area, even in the face of a natural disaster, is not an option.
Hawaii County has the highest poverty rate in the state, with 20.2 percent of all Big Island families with children under the age of 18 living below the national poverty line.
The district of Puna has the highest poverty rate within Hawaii County.
"There are many people that can not leave at all," says lower Puna resident Ronnette Gonsalves.
"A lot of people here struggle financially and now that struggle is five-fold."
"They're afraid to leave their homes not knowing if they will be able to get back.
Some have invested everything they have into their homes.
It's crazy because you have people who have the means to get out of here and then you have people who don't have $10 for gas to get out.
They don't have money to get a hotel room.
It's challenging and heartbreaking."
The plant has been shut down, and tens of thousands of gallons of flammable gas stored at the site have been removed.
County, state and federal authorities are monitoring the flow and working with the power plant "to ensure the safety of the surrounding communities," the county civil defence agency said in a statement.
It added that nearby residents should be prepared to leave the area with little notice because of gas or lava inundation.
"This situation will be closely monitored," the statement said.
"There is no immediate threat to any of the wells at PGV."
PGV is a geothermal energy conversion plant that extracts steam and hot liquid from underground wells.
The liquid, or brine, is not used for electricity, but the steam is directed to a turbine generator that produces electricity.
Even the exhaust steam from the turbine is used to heat the fluid to drive a second turbine, generating more power.
The electricity generated by PGV is sold to Hawaii Electric Light.
Authorities also are contending with another threat as molten rock from Kilauea finds its way to the ocean: laze.
Laze forms when 2,000-degree lava hits the cooler seawater.
A hydrochloric acid steam cloud billows into the air, along with fine particles of glass.
The acid in the plume is about as corrosive as diluted battery acid, scientists said.
Laze can cause irritations of the skin, eyes and lungs, and people who have asthma or emphysema may be particularly vulnerable.