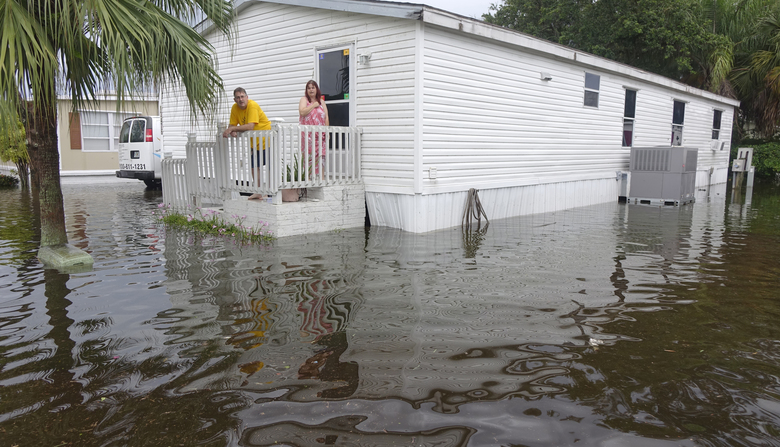 Photo seattletimes.com
Miami homeowners are increasingly worried their real estate values could drop because of sea-level rise.
Research published last week in the journal Environmental Research Letters found that single-family homes in Miami-Dade County were increasing in value more slowly than similar homes at higher elevations.
"To see them really separate is pretty shocking because you can infer that this is a pricing signal from climate change," said Jesse Keenan, a real estate professor at the Harvard University Graduate School of Design and author of the study.
The concern is twofold.
There will be more frequent storms in the short term.
The properties could be difficult to sell because, in the long run, they could be totally underwater. Another paper, published by the University of Colorado, Boulder, and Pennsylvania State University, found that homes near the coast that could be affected by sea-level rise were priced 7 percent lower compared with similar properties that do not have the same vulnerability.
The study is under peer review.
"As prices decline, that's a signal to developers and investors that maybe you shouldn't be investing a lot of money in an area that will be flooded in 20 years," said Ryan Lewis, an assistant professor at the University of Colorado's Leeds School of Business.

Climate Changed! King tides now pose a threat to Miami residents as floods now occur every other month for some! In Miami, sea-level rise is not a problem for future generations.

It's a present-day reality.
In Miami, sea levels are rising, and residents have noticed.
Navarrete: "The water is here.
It's not that I'm talking about some sci-fi movie here.
No. I live it.
I see it, it's tangible."
That's Valerie Navarrete.
She's lived in South Beach for more than 20 years.
About seven years ago, sea-level rise, a high tide, and rain combined to cause a major flood. Navarrete: "I remember was a Friday afternoon and it was raining for about one hour.
When we came out our garage had over three feet of water - not inches - feet.
So we lost several cars.
It's just unbelievable."
Navarrete's garage now floods about once every other month.
She often has to wear rainboots just to get to her car.
Navarrete: "And sometimes the water would be higher than that.
So I couldn't wear my boots because otherwise, I would get the water inside the boots.
So then we have to go barefoot, which is disgusting."
And when the moon, earth, and sun align, tides are even higher than usual.
They're called king tides and last for about a week.
During king tides, Navarrete's garage floods twice a day.