The "Beast Of The East" delivers a cold month for Europe but NOAA claim March 5th warmest on record: Low sea ice at the poles persists 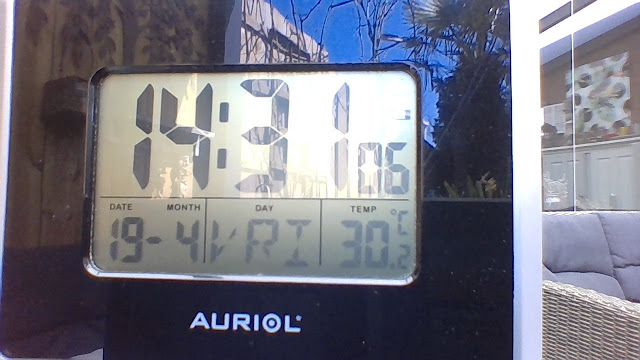 Last Friday my garden thermometer hit 30 deg C (87 deg F) in the shade which was an incredible warm week in Holland, however, the "Beast Of The East", cold air from Syberia, made sure Holland had a very cold March.

With the warmest April day in the UK last week since 1949 and the hottest week in April ever in Holland with the mercury hitting 30 deg C 86 deg F, snow in North Africa, southern Spain, southern France and Italy in Europe.
The entire mid-west plains of the US wiped out due to a massive spring snowstorm and temperatures pushing 50 deg C (122 deg F) in India, Pakistan and the Philippines you would be forgiven for thinking the weather was acting a little strange recently well NOAA has released their monthly global weather report for March.
And it's warm!

According to them, March was the 5th warmest on record...
Arctic sea ice coverage was 2nd smallest on record.
They go on...
Taken as a whole, the globe just had its fifth warmest March on record, but temperatures varied markedly across the continents.

The year to date | January–March 2018
The year-to-date average global temperature was 1.33 degrees F above the 20th-century average of 54.1 F. This was the sixth warmest average temperature for the year to date on record and the coolest such period since 2014.

Antarctic sea ice coverage in March was 12.4 percent below average, the seventh smallest on record for March.

The globally averaged sea surface temperature was fifth warmest for both March and the year to date.