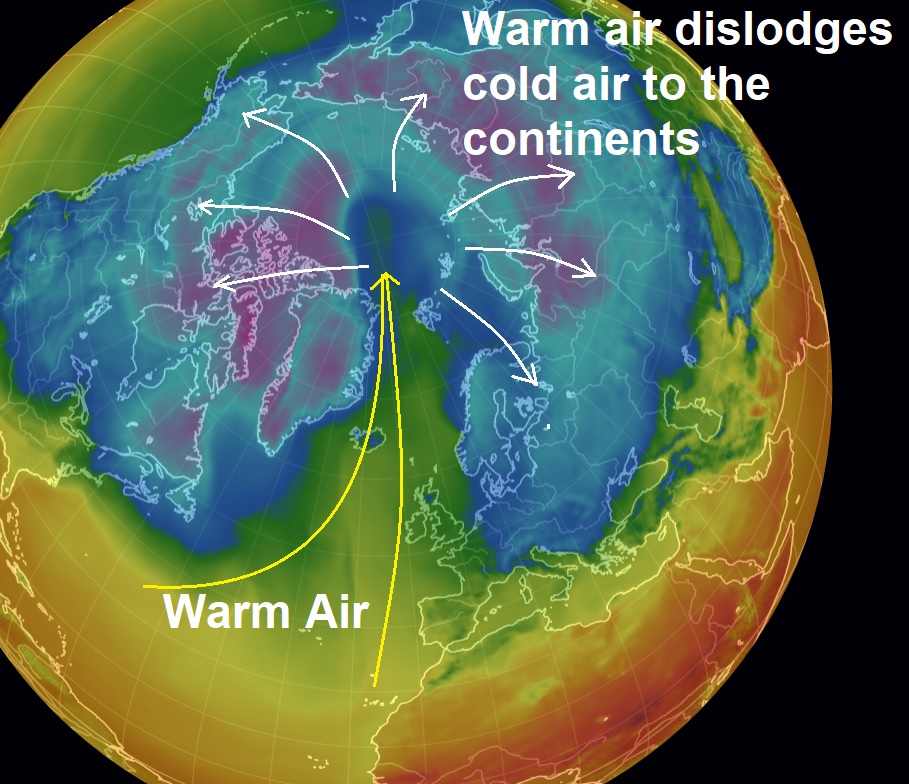 During the middle of February, a split in the Polar Vortex allowed cold air to plunge southward and warm air to surge northward to the North Pole.
"The split of the Polar Vortex was brought on by rapid warming in the upper part of the atmosphere over the North Pole a couple of weeks earlier," according to AccuWeather Lead Long-Range Meteorologist Paul Pastelok.
This event is called sudden stratospheric warming (SSW). An atmospheric roadblock developed around much of the Northern Hemisphere in general.
With the routine forward motion stalled, warm air was able to push toward the Arctic Circle and cold air was able to push southward toward the Mediterranean Sea and California.
The normal west to east movement of storm systems was altered.
The Polar Vortex is a storm high in the atmosphere that helps to keep frigid air locked up in the Arctic.
'This is an anomaly among anomalies.
This means that there are still a lot of surprises in store during times when we continue to Wake up the beast in our climate', said Director of the Centre of the Earth system in Pennsylvania state University Michael Mann.
It is hard to say for certain whether the warming Arctic is the result of human activities or natural variations given that the lack of measuring stations in the region and satellite data records only begin in the late 70s.
A blast of Siberian weather has sent temperatures plunging across much of Europe, carpeting palm-lined beaches in snow and prompting warnings for the homeless and elderly people.
And in some places, such as the DMI's Cape Morris Jesup weather station at Greenland's most northernmost point, the mercury has even been rising above freezing-which is highly unusual for this time of year.
"The warm event at Cape Morris Jesup weather station is not record-breaking in terms of the highest ever recorded temperature in February, but that event in 2011 was very short-lived compared to what we have seen this year...", she said.
"It's never been this extreme", said Ruth Mottram, a climate scientist at the Danish Meteorological Institute (DMI), according to Reuters.
"But when we look at the high Arctic overall, the temperature record since 1958 has never seen a warm spike of this magnitude in February", she said.
The cause and significance of this sharp uptick are now under scrutiny.
She said some of the warmth in northern Greenland was likely due to downsloping winds are known as Foehn winds, which can increase air temperatures.
"As we rapidly warm the Arctic, we can expect that future years will bring us even more examples of unprecedented weather".
Warming events are related to the decline of winter sea ice in the Arctic.
Scientists say a long-term shrinking of sea ice on the Arctic Ocean, linked to global warming, exposes warmer water below that releases more heat into the atmosphere.
Normally, the vortex depends on the temperature differences between the Arctic and mid-latitudes. That "warm Arctic, cold continent" (WAC#C) pattern is sometimes dubbed "wacc-y" or "wacky" among climate scientists.
But scientists are deeply anxious about the pace of change in the Arctic, where temperatures are rising twice as fast as anywhere else on the planet and the sea ice area is shrinking.
A weather phenomenon called a "sudden stratospheric warming" has produced North Pole temperatures at or above freezing.
The lead-up to the unusual heat wave The Arctic region is still in darkness until the sun returns later in March, and this is supposed to be the time of year when the Arctic sea ice is at its maximum extent and frozen solid.
This sensation has blasted cold air over Europe, and it's thought the freezing temperatures could happen more often because of man-made global warming.
Rohde said that while controversial, the theory appears to be holding true this year.
"The current excursions of 20C or more above average experienced in the Arctic are nearly certainly mostly due to natural variability", said Zeke Hausfather of Berkeley Earth.
The Arctic region is warming at a much greater rate than anywhere else.
"If anything, climate models suggest the opposite is true, that high-latitude winters will be slightly less variable as the world warms".
At the Longyearbyen weather station on the Island of Svalbard in the Arctic Ocean, temperatures were 10 C above average over the last 30 days, according to Zack Labe, a climate modeller at the University of California Irvine.