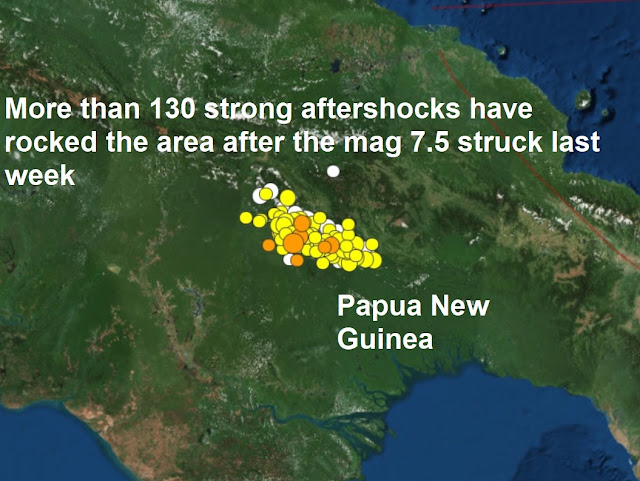 USGS
At least 67 people were killed by a major earthquake that devastated Papua New Guinea's remote highlands last week, the Red Cross said Monday, with thousands homeless and without food and clean water.
The recovery effort has been slow as aid workers grapple with blocked roads and power outages to reach cut-off villages after the 7.5-magnitude quake struck on February 26 in the Pacific nation's mountainous interior.
Terrified locals in the Southern Highlands, Western, Enga and Hela provinces have also had to deal with more than 100 strong aftershocks, including three 6.0-magnitude tremors.
Compounding the fallout was an announcement Monday that the impoverished country's biggest-ever development - the PNG LNG project operated by US energy giant ExxonMobil - will be offline for up to eight weeks as the quake-hit facilities undergo repairs.
"The death toll reported by the National Disaster Centre and disaster management teams on Friday is 67," the PNG country head of the International Federation of Red Cross and Red Crescent Societies Udaya Regmi told AFP from the capital Port Moresby.
"Around 143,000 people are affected and 17,000 people have been generally displaced because their homes are either fully or partially damaged and not in a condition to live in."
No official government death toll has been released.
Regmi added that water and sanitation were major concerns for local communities, with relief workers unable to get bigger trucks carrying food through to some areas because of damage to roads by landslides.
Relief efforts are slowly being ramped up, with millions of dollars in aid pledged by the government, ExxonMobil and the Australian energy producers, Oil Search and Santos, involved in the gas project. The Australian and New Zealand defence forces have begun delivering aid, while the China Red Cross and Beijing have pledged financial assistance, according to the PNG Post-Courier.
Oil Search managing director Peter Botten, who travelled to the Highlands to survey the damage, said the impact "has been enormous, with many deaths in the region as well as the destruction of houses, schools, roads and bridges".
"Many communities are without basic necessities, such as food, clean water, shelter and medical support."
Prime Minister Peter O'Neill said last week the shutdown of the gas plant would have a "huge impact" on the economy, which is heavily dependent on its natural resources.
ExxonMobil PNG managing director Andrew Barry said production at the US$19 billion project would be restored as quickly as possible, adding that it was an "unprecedented event for the country" and the firm.