NOAA: January 5th warmest on record for the globe but try telling that to most of the Northern Hemisphere with record cold and snow in strange places 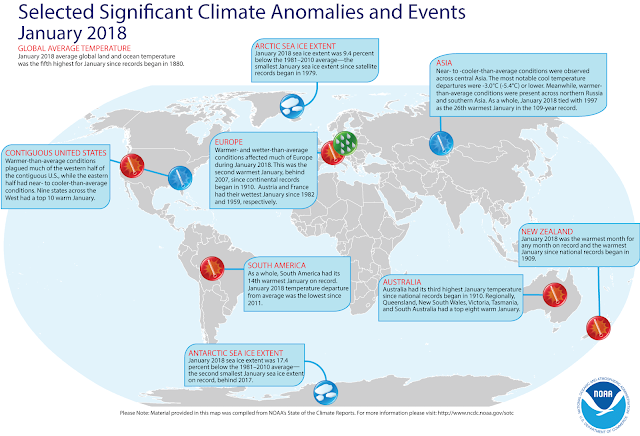 Credit NOAA Click on image to enlarge
An annotated map of the globe showing notable climate events that occurred in January 2018.
January was 5th warmest on record for the globe
Despite the cooling influence of La Nina this winter, the global temperature ranked among the five warmest on record in January. Earth’s polar regions continued to experience record-low ice conditions.
Let’s dive deeper into NOAA’s monthly analysis to see how the planet fared in the first month of the year but first what was The Big Wobble's vision of January?

With crippling cold, bringing strong winds and blizzards most of the US had a record cold January and at one stage snow lay on the ground in all 50 states.
The Gulf of Mexico and Florida suffered freeze warnings as an Arctic blast hit the deep south bringing record cold temperatures there in January.
The longest cold snap in more than 80 years around Chicago area left the locals shivering but Alaska the UK and Holland all recorded their warmest January day.
Storm Eleanor impacted western Europe leaving 200,000 French without power as category 2 hurricane strength battered western Europe, Ireland and the UK.
Kenya experienced one of the world's worst heat waves when temperatures hit more than 40 degrees Celsius (above 104 deg F) for the whole month of January.
Frigid Nepal was described as cold-hell with 221 dead and hundreds in hospital along the Indian border as temperatures hit -31.5 C (-25 F).
China was hit by a second wave of snow after blizzard's earlier in the month leaving eleven dead and 2.5 million without power.
While on the other end of the crazy scale Sydney recorded it's hottest January day ever when the temperature hit 47.3 deg C 120 deg F. melting roads.
Thousands of people some with babies were trapped in their vehicles by heavy snow overnight on a highway near the usually warm Madrid Spain.
January had Sahara snowfall too, temperatures in the summer can reach 50 deg C Ain Sefra, Algeria, known as the gateway to the Sahara desert on the 9th was covered in snow.
Europe battered down the hatches as "Storm Fionn" the sixth named storm of the season arrived bringing galeforce winds and snow.
Spare a thought for Russians living in the Yakutia region where temperatures of -84℃ (-119℉) were shattering and bursting thermometers as the INSANE cold lasted through January.
The river Seine in Paris flooded parts of the city as it hit the highest mark in over a century more than four metres above its normal height.
Georgina became the 7th named storm of the season to batter Ireland and the UK with 90mph winds and flooding.
A severe heatwave hit South Australia, with incredible temperatures in some areas nudging 50 deg C 122 deg F.
It should have been around 20C but a rare snowstorm hit the Saudi Arabian desert just days after Morocco North Africa saw -7°C with heavy snow and heavy snow in Algeria.

January was 5th warmest on record for the globe
Arctic and Antarctic sea ice coverage remain at record, near-record lows.

Despite the cooling influence of La Nina this winter, the global temperature ranked among the five warmest on record in January. Earth’s polar regions continued to experience record-low ice conditions.

Let’s dive deeper into NOAA’s monthly analysis to see how the planet fared in the first month of the year:

Climate by the numbers
January 2018
The average global temperature in January 2018 was 1.28 degrees F above the 20th-century average of 53.6 degrees, according to scientists from NOAA’s National Centers for Environmental Information. This average temperature was the fifth highest for the month of January in the NOAA’s record, which dates back to 1880. This was the 42nd consecutive January (since 1977) and the 397th consecutive month (since January 1985) with temperatures above the 20th-century average. The last four years (2015-2018) saw the five warmest Januarys on record.
Other notable climate facts from around the world last month included:

The average Arctic sea ice coverage in January was 9.4 percent below the 1981-2010 average, the smallest for the month since records began in 1979.

Antarctic sea ice extent in January was 17.4 percent below average, the second smallest January on record.

The globally averaged land-surface temperature was 2 degrees F above the 20th-century average, ranking as the eighth warmest for the month of January.

The globally averaged sea-surface temperature was 1.01 degrees F above average and tied with 1998 as the fifth warmest for January on record.