The river Seine in Paris is flooding parts of the city: Likely to hit the highest mark in over a century more than four metres above its normal height 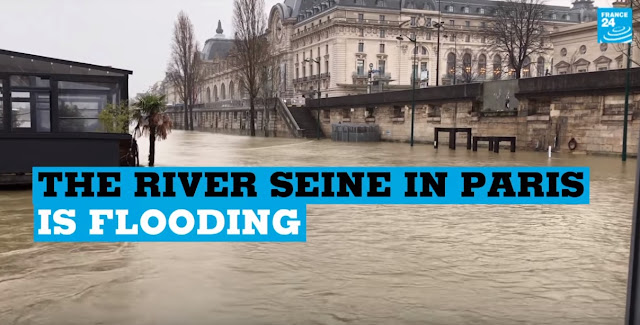 Credit France24 taken from video below
After five weeks of relentless rain, the famous river has broken its banks.
Parisians have been warned to stay away from the river Seine as it continues to rise, flooding surrounding roads and causing disruption to the city's transport network.
As water levels increased on Wednesday, the capital's authorities said the river could pass the 6.10-metre (20ft) level of 2016, the highest in over a century and more than four metres above its normal height.
Quayside roads and tunnels have been closed and all river traffic, including cruise boats and water taxis, halted as vessels are unable to pass under the bridges.
Houseboat residents have been advised to move out and Michel Delpuech, the head of the city police, told residents to take extreme care near the water.
On Wednesday morning, a central section of the RER C urban rail line was shut down, closing several stations, including Saint-Michel Notre-Dame, Musee d'Orsay, and Champ de Mars near the Eiffel Tower.
The rail operator, SNCF, said it halted services after closing ventilation shafts to prevent further flooding of tunnels, where staff have been pumping out water.
With the city on orange alert, the second-highest flood warning level, the mayor, Anne Hidalgo, called a crisis meeting with police chiefs.
Officials said the situation was serious but not catastrophic.
However, the Louvre and Musee d'Orsay, which both flank the river, was reportedly preparing to move works of art in storage.
A Louvre official said the staff were watching the situation closely: "We will implement our flood risk prevention plan when the Seine reaches 5.08m."
The river overflowed earlier this week because of flood water from upstream where the basin that feeds the Seine has received twice as much rain as normal.
Paris suffered the "flood of the century" in 1910 when the Seine reached 8.62 metres.
It has been preparing for a similar event for several years.
"It's not a question of if there will be a flood, but when," Colombe Brossel, the mayor's assistant, said in 2016.
Twenty-three French departments are on high flooding alert, from the Alps in western France to Normandy in the east.