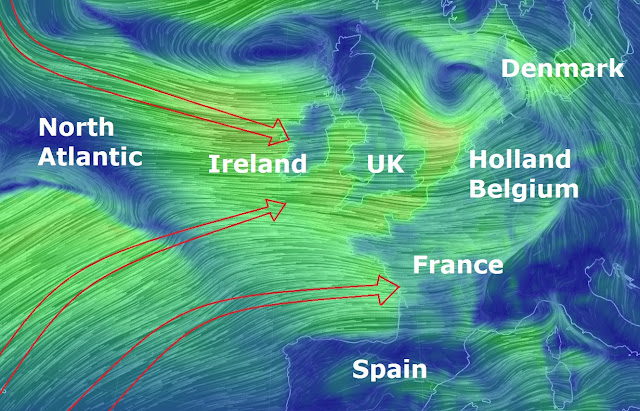 Earthwindmap
Storm Eleanor cuts power to 200,000 households in northern France on Wednesday after storm Carmen cut power to 65,000 households in western France on new years eve, Monday.
The storm is set to move to eastern regions throughout the day and is thought to bring more destruction.
Storm Eleanor which has produced wind gusts of more than 100mph which is a category 2 hurricane strength,
(Saffir-Simpson Hurricane Wind Scale) battered Ireland and the UK overnight with thousands without power
According to Reuters, households in the Normandy region were the worst hit by storm Eleanor, Enedis, a unit of state-controlled EDF said, while the area around Paris and northeastern Picardie and Champagne-Ardenne were also among those affected.
The latest weather warning and strong winds come after winter storm Carmen battered western France on Jan. 1, with some 40,000 households in the Brittany region temporarily losing power on Monday.

Photo LeMancheLibre
A storm disrupted air traffic at Amsterdam’s Schiphol airport on Wednesday, with many flights cancelled or delayed.
Airlines cancelled 176 out of a total of more than 1,200 incoming and outgoing flights on Wednesday morning, a spokesman for the Dutch national airport said.
That number was expected to rise, as the storm would grow stronger during the day, with wind gusts reaching speeds of up to 120 kph (75 mph).
Schiphol is Europe’s third busiest airport in a number of total passengers per year, after London Heathrow and Paris Charles de Gaulle.
Storm Eleanor battered the Netherlands on Wednesday morning with wind speeds of up to 110kph in coastal areas according to DutchNewsLive.
The KNMI weather bureau had issued a nationwide code yellow alert but raised this to orange for Noord-Holland, Friesland, Flevoland and the Wadden islands for late morning.
Trees were blown down and trains between Amsterdam and Breukelen were disrupted for a time after a tree hit the overhead cables.
High-speed trains between Rotterdam and Breda were cancelled because of the weather and Intercity services between Rotterdam and The Hague were also reduced, Dutch rail operator NS said.