Some kind of record? Mount Sinabung spew's ash and molton lava into the Indonesian sky is the fifth volcano in 24 hours showing increased activity. 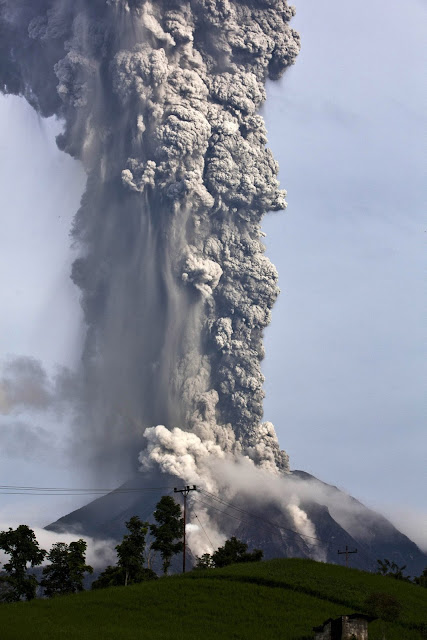 Photo Getty Images (stock photo)
It must be some kind of record!
It's the fifth volcano in 24 hours spewing ash and showing activity after  The Mayon volcano in the Philippines, Bali's Mount Agung, the Stromboli volcano Eolian Islands in Italy and the Tenorio volcano Costa Rica and the 7th in just over week when we add The Klyuchevskoy Volcano in the Kamchatka Region and a volcano eruption on Kadovar Island Papua New Guinea.
Mount Sinabung the Indonesian colossus has spewed ash steam and molton lava for the first time since October 2017.
The colossus roared back to life in 2010 after hundreds of years of inactivity.
January has been a remarkable start for volcanic activity in 2018 with many experts claiming this year will be a record year for quakes and eruptions...So far so good.
Mount Sinabung, one of Indonesia's 129 active volcanoes along with Bali's Mount Agung which caused the evacuation of 300,000 residents last September.

Update!
Lava can be seen spewing out of the volcano, lighting up the night sky.
The enormous volcano was dormant for centuries before roaring back to life in 2010, and has since remained highly active and erupted several times.
While today's eruption is the first of 2018, the volcano actually erupted just a fortnight ago, spewing huge plumes of smoke into the skies above the Indonesian island of Sumatra.
Locals watched as the skies turned grey when the suffocating volcanic ash billowed out, but fortunately, the eruption didn't cause any casualties.
BNPB spokesman Sutopo Nugroho said: "Thank God, no fatalities have been reported.
After smoke billowed into the sky just two weeks ago, lava has begun rolling down Mt Sinabung. "Residents who live near the rivers upstream from Sinabung must be watchful for lava."
For the first time this year lava has been spotted dribbling down the side of the volcano, prompting concerns for locals living nearby.
The Indonesian National Disaster Mitigation Agency has warned against locals getting near the danger zone which is within three to seven-kilometers around Mount Sinabung's crater.
The incredibly frequent eruptions of the huge volcano have prompted authorities to put up permanent signs to warn people against going anywhere near it.