Phantom tsunami: Alaska buoy at station 46410 sent data to the mainland showing a massive 35ft (10 meters) spike in water and a wave that never was! 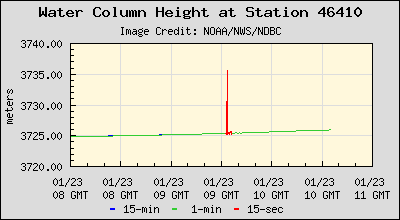 Credit NOAA/The tsunami that never was...
The case of the phantom tsunami: Why did an Alaska buoy show a big wave that wasn’t there?
in the moments just after the powerful 7.9 Alaskan quake, a small buoy out in the Gulf of Alaska caused panic among officials.
As the massive quake struck a buoy out in the Gulf of Alaska at station 46410, a deep-ocean data collector sent data back to the mainland showing a massive 35ft (10 meters) spike in water displacement of the coast of Kodiak Island, tsunami...
Anybody logging onto the National Data Buoy Center site for a short interval could see that the buoy showed a red spike and a 10-meter water displacement.
I even downloaded a screen grab my self, see above.
Immediately sirens were turned on all along the Gulf of Alaska rudely waking thousands of shocked Alaskan's who were warned to evacuate at least 100 metres onto higher ground who not surprisingly were expecting a massive tsunami wave.
According to Anchorage Daily News, here's what happened, as Hale explains it: That station is about 30 miles from the epicentre.
The sudden spike in water displacement so soon after the quake probably reflected the burst of seismic energy released, not a wave.
The buoy is actually two parts: a bottom pressure recorder on the seafloor with "a whole bunch of batteries on it and a pressure sensor," and, about 100 yards away, an anchor attached to a surface buoy.
The buoy receives the pressure readings and sends them via satellite to tsunami centres and the National Data Buoy Center.
Earthquakes generate what are known as Rayleigh waves: undulating motions intense near the source and diminishing over distance.
Hale said he's pretty sure that's what the recorder picked up.
“When it first hits the buoys, especially if the epicentre is close to the buoys, when the (Rayleigh) wave goes across that, (if) it changes the height or the ground itself starts bouncing up and down, it’s going to record a change of pressure.”
Rather than producing a Japanese type tsunami, the quake produced nothing more than a burp!