A mag 5.8 - 173km struck W of Ferndale, California after a week of near misses along the Ring Of Fire: When not if will we run out of luck? 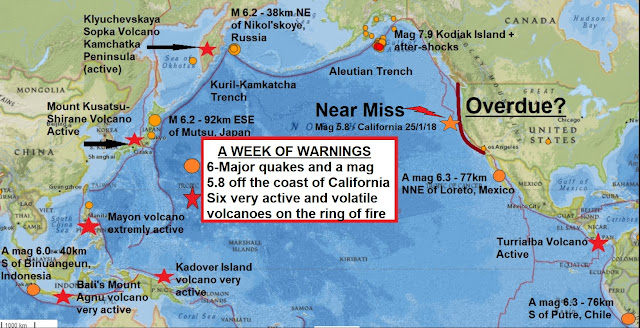 USGS/Click on image to enlarge
What a week a week it's been for The Pacific Ring Of Fire and millions of people can consider themselves very lucky because it was also a week of very very near misses.

Yesterday evening I wrote; "the whole Pacific Ring is rumbling, from Alaska to Papua New Guinea and Chile to Russia and Philippines to Mexico with one exception, once again the US West coast has come away unscathed but for how long?" See Here.
I woke this morning to the news the US West Coast rode their luck once again when a mag 5.8 - 173km struck W of Ferndale, California with a mag 5.0 after-shock, it could have been much worse.
"The Big One" is well overdue, according to Wikipedia, a study published in 2006 in the journal "Nature" found that the San Andreas fault has reached a sufficient stress level for an earthquake of magnitude greater than 7.0.
This study also found that the risk of a large earthquake may be increasing more rapidly than scientists had previously believed.
Whats more important the M 7.9 - 280km SE of Kodiak, Alaska on Tuesday didn't cause any injuries or cause any damage!
Incredible considering the shallow depth of the powerful Alaskan quake.
A tsunami could have been a disaster for millions of people from Alaska to Southern California but it didn't materialise, luckily.
With nearly 300,000 people evacuated or affected by Pacific Ring volcano activity this last few weeks and the fact that millions got lucky along US and Canada coast once again, we should be counting our blessings.
As The Philippines is bracing for a possible three-month-long emergency in areas around an erupting Mayon volcano, which has already displaced more than 81,000 and caused overcrowding at temporary shelters, and the U.S.  claiming the West Coast region is most vulnerable to tsunamis - the massive waves of water unleashed by undersea earthquakes - is dangerously under-prepared, we must surely be asking ourselves when not if will the big one strike!