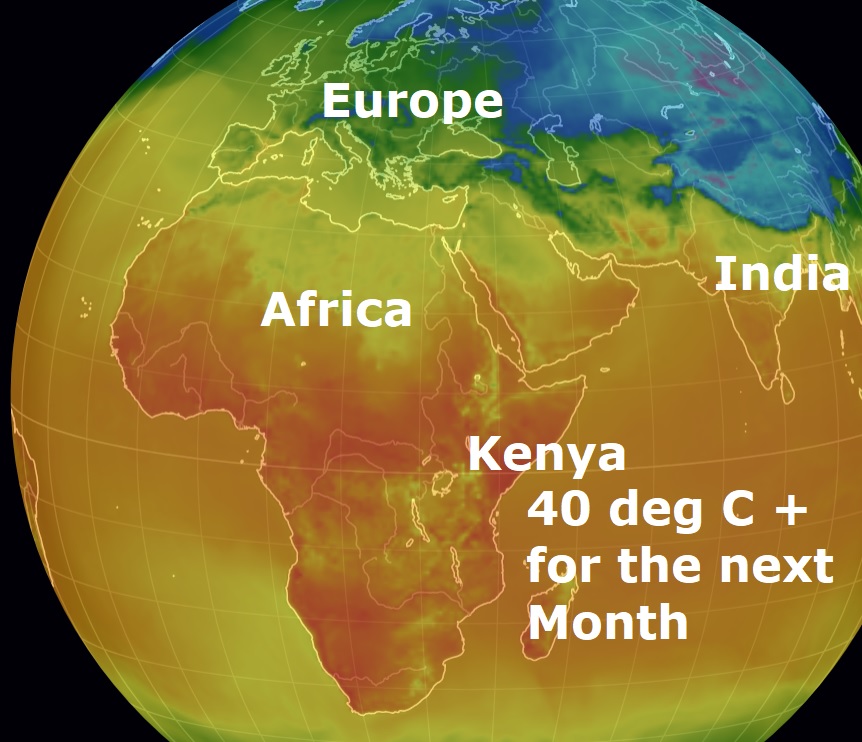 Earthwindmap
For the first time in history, Kenya is expected to experience one of the world's worst heat waves, with temperatures expected to hit more than 40 degrees Celsius (above 104 deg F) during the day in northwestern and northeastern parts of the country.
A month-long weather forecast released by the Kenya Meteorological Department on Wednesday indicates that the looming heat wave will most likely be triggered by bursts of extreme heat that are expected to hit the two regions in the month of January.
According to Peter Ambenje, the Deputy Director at Kenya Meteorological Department, the heat wave is likely to worsen droughts and sandstorms in the two areas thus causing serious socio-economic problems.
"The expected high daytime temperatures of more than 40deg C in Northwestern and Northeastern parts of the country may give rise to heat waves that are a potential health risk," Ambenje was quoted by the Star. Being the first time that the country is experiencing this kind of extremely hot weather condition, the meteorological department has warned Kenyans to take caution as too much heat can easily cause death.
The abnormally hot and humid weather prevents a person's body from cooling itself through sweating, which eventually causes heat stroke.
Extreme heat at night also causes discomfort and can easily lead to serious health problems.
The meteorologist also warns that the unusual weather condition might affect water supply in many parts of the country due to dry water catchment areas.
Kenyans in these areas should, therefore, ready themselves for tough times ahead.
In a study published by Environmental Research Letters in 2016, scientists warned that frequent extreme heat waves are on the rise in Africa and that the extended hot weather conditions could negatively affect life expectancy and food production on the continent.
The study further cautioned that the heat waves currently classified as unusual could be a normal occurrence in the next 20 years, mainly due to the increasing average global temperature.