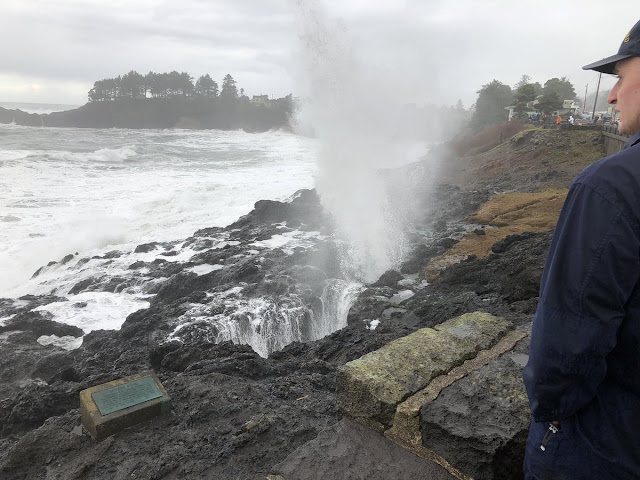 Photo nbc16.com
A man is missing and coastal authorities were warning people to stay away from the beaches and cliffs as waves almost 60 feet high (almost 20 metres) were pounding the Oregon Coast on Thursday.
The forecast of dramatic seas and unusually high waves drew many people to the shore, and one 44-year-old man remained missing after being swept off a seawall near Depoe Bay on Thursday morning, according to information from the Depoe Bay Fire District.
Authorities are withholding the man's identity until his family in Mexico can be located and notified. Popular sea-front Lincoln City establishments such as the Sea Gypsy Inn at 145 NW Inlet Ave., and the Sandcastle Beachfront Motel at 3417 SW Anchor Ave., were heavily damaged by the surging waters, with windows torn out and their interiors inundated.
The North Lincoln Fire and Rescue posted photographs of damage to Kyllo's Seafood and Grill, at 1110 NW 1st Court, where waves tore through windows and stripped off siding before swirling through the parking lot, leaving large rocks in their wake.
In Newport, Sgt. Keith Garrett said Thursday night that a lightning storm might be linked with the report of smoke in an elevator, but the city seemed to have escaped the same kind of storm surge damage.
"It's definitely some weird weather," he said, referring to the fact that thunderstorms are rare on the coast.
He cautioned visitors to view the waves from a safe distance and to watch for standing water.
The storm also hit the northern Oregon Coast, with one viral video showing a wave pushing foam that looked like it came off a cafe latte up the main streets of Cannon Beach.
The National Weather Service issued a coastal flood warning Thursday afternoon, cautioning those in the area to "be alert for rising water, and take appropriate action to protect life and property." The warning listed Willapa Bay, Seaside, Nehalem, Tillamook, Florence and all cities in close vicinity as particularly vulnerable to flooding.
The warning is issued through midnight Thursday, but the stormy weather is expected to continue to a lesser degree. The coastal forecast calls for thunderstorms to continue through the weekend.