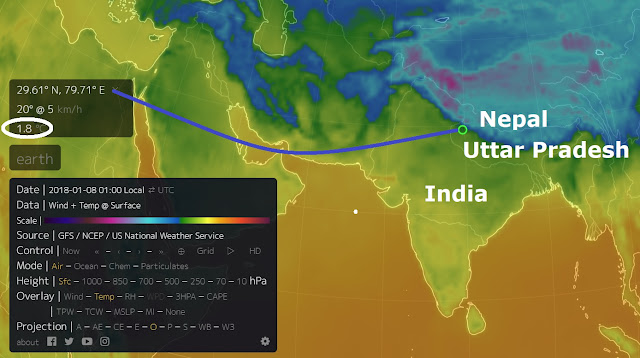 Earthwindmap
Despite being sunny, a cold wave continued in most parts of Uttar Pradesh on Wednesday.
More than 40 persons were reported dead in the state in the last 24 hours, taking the toll to 143 so far. Early morning fog disrupted normal life in the state capital and neighbouring areas.
A dozen trains were cancelled due to poor visibility which also lead to delays.
Winter vacations of schools in the state capital have been extended by one more day on orders of the District Magistrate.
Three persons have been killed since Tuesday in road accidents due to fog.
Visibility in many areas dropped to 15-20 metres, the Met said.
A six-year-old boy Satyam who had gone to school in Barabanki died due to cold, parents have alleged.
Despite government's orders, the private school had not complied, prompting an inquiry into the matter.
Deaths have also been reported from Kanpur, Fatehpur, Kannauj, Pilibhit, Moradabad, Sambhal, Amroha, Rampur, Hamirpur, Azamgarh, Ghazipur and Ballia.
Government officials said that they were providing warm blankets, clothing, lighting up bonfires and establishing night shelters.
These arrangements, however, were falling short due to the unabated cold wave in the state.
The Regional Met Office has forecast cold wave conditions would continue for some more days.
It was likely to become better only after Monday.
More than 700 stray animals, mostly cows and dogs have died in the state capital, an official of the Lucknow Municipal Corporation said. Meerut was the coldest in the state at 2.9 degrees Celsius. Lucknow recorded a temperature of 4.8.
The Met said the intense cold wave was due to a western disturbance.

Last week a spell of a cold wave claimed at least eleven lives in southern Nepal's districts of Terai region bordering India, media reports said on Saturday.Hundreds of locals have been taking to hospital suffering from hyperthermia.Six people died of freezing cold in Saptari district and three in Rautahat district, mostly children and elderly people, Republica Newspaper reported referring local authorities."The unbearable cold could be the most probable reason for all of these deaths," Ranjit Kumar Jha, senior consultant at Gajendra Narayan Singh Sagarmatha Zonal Hospital, said.Cold wave in Terai districts of the southern plains of Nepal has badly affected daily lives, halting regular activities including a closure of the academic institutions.With the mercury dipping, the number of patients suffering from diarrhoea, fever and respiratory problems has gone up in the district.