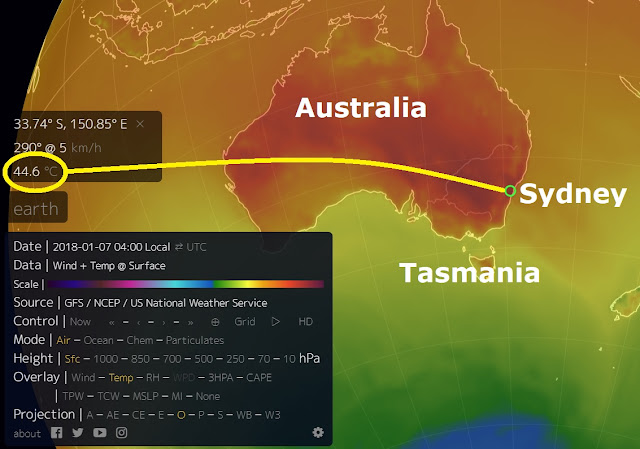 Earthwindmap
Sydney recorded almost the hottest day ever in its history as the mercury reached 47.3 deg C, almost 120 deg F on Sunday.
The temperature fell just short of the all-time highest recorded in 1939 when the silver line stopped at 47.8 deg C.
According to The Sydney Morning Herald, it was a scorching day that saw international tennis cancelled and residents flock to the beach in droves, the Bureau of Meteorology also felt the heat after mistakenly announcing it as metropolitan Sydney's hottest day. 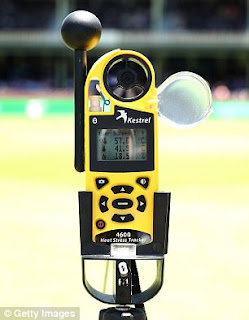 Spare a thought for the England cricketers who had to bowl in the hottest day ever recorded in an Ashes Test (Australia vs England) the previous hottest Ashes Test day appears to be a 43.1 degree C day during the Adelaide Test between Australia and England back in 1908 but on pitch side temperatures reached an incredible 57.6 deg C that is an astonishing 136 deg F. See right.
According to the BBC, Several blazes had already been recorded on Saturday, and a number of properties were destroyed in the states of Victoria and South Australia.
In September 2017, Australians were warned to prepare for a dangerous bushfire season after one of the driest winters on record.
More than 200 weather records were broken across Australia between December 2016 and February 2017, with heat waves, bushfires and flooding throughout the country's summer season.
Experts have warned that land and sea temperatures have been affected by climate change, leading to more extreme weather conditions.
Only yesterday The Big Wobble reported bushfires approaching Melbourne with heatwave melting highways in Australia.