New Year's Eve shocker! Temperatures in parts of the US to plummet to minus 36'6 deg C (minus 34 deg F): Meteorologists warn of frostbite 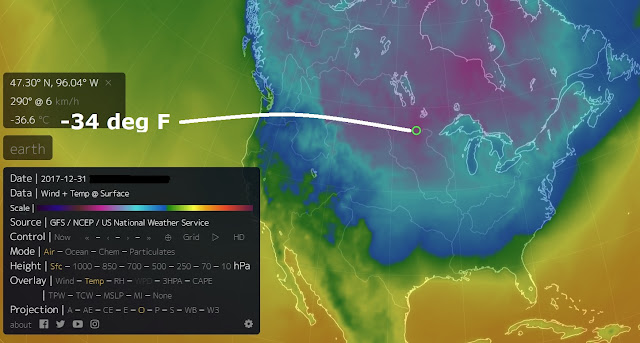 It's the kind of temperatures human beings shouldn't have to endure!
Most of the US will be plunged into Arctic conditions on New Year's Eve with some parts plummeting to minus 36.6 deg C (minus 34 deg F) with meteorologists warning of frostbite to exposed skin.

It's the Midwest and the Northeast who will witness the most severe cold with the wind-feel-factor magnifying the frigid temperatures.

2017 appears to be going out with a bang rather than a whimper after Record snow totals were smashed as Erie, Pennsylvania received 53 inches of snow in 30 hours, this is the greatest two-day total in the entire state of Pennsylvania.
The previous record was 44" in Morgantown, Pennsylvania on March 20 and 21, 1958.
It also beats the 13-day total snowfall record for Erie, Pennsylvania, which was 52.8" from Dec. 31, 1998, to January 12, 1998.

According to CNN, the snowfall total was more than four times the city's previous all-time Christmas record of 8.1 inches, and it also broke the record for most snowfall in one day in the city's history, which was 20 inches on November 22, 1956.
The snow didn't stop overnight, either.
Erie picked up another 24.5 inches of snow on Tuesday, bringing the two-day tally to 58.5 inches.
That is the highest two-day snowfall total in the entire state of Pennsylvania, according to the National Weather Service.
However, the storm, which actually began on Sunday, has dropped a grand total of 68 inches of snow, more than a metre on Erie, according to National Weather Service Cleveland. Erie County Executive Kathy Dahlkemper signed a Declaration of Disaster Emergency.
According to the Daily Mail, the brutal cold front is currently clobbering several states with many of the temperatures only reaching a high in the 20s and lows in the single digits well below the freezing point.
Wind chill advisories or warnings are in effect for all of North Dakota and Wisconsin, as well as swaths of South Dakota, Minnesota, Iowa, Michigan and Indiana.
In addition, wind chill advisories are also in effect for parts of Maine, Vermont, New Hampshire and New York.
Up to one million revellers are expected to gather in New York City's Times Square on Saturday night to celebrate. Forecasters predict the temperature to be around 12 degrees in the evening, however, it will feel dramatically colder due to the wind chill.