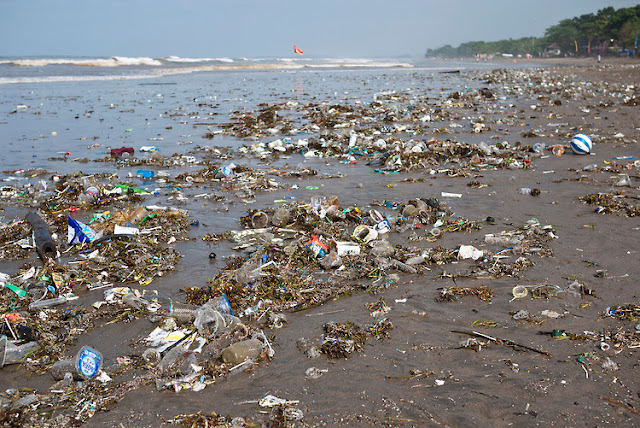 Photo nusahibi.com
Bali's palm-fringed Kuta beach has long been a favourite with tourists seeking sun and surf, but nowadays its golden shoreline is disappearing under a mountain of garbage.
Plastic straws and food packaging are strewn between sunbathers, while surfers bobbing behind the waves dodge waste flushed out from rivers or brought in by swirling currents.
"When I want to swim, it is not really nice.
I see a lot of garbage here every day, every time," Austrian traveller Vanessa Moonshine explains. "It's always coming from the ocean.
It's really horrible," she adds.
Often dubbed a paradise on earth, the Indonesian holiday island has become an embarrassing poster child for the country's trash problem.
The archipelago of more than 17,000 islands is the world's second-biggest contributor to marine debris after China, and a colossal 1.29 million metric tons is estimated to be produced annually by Indonesia.
The waves of plastic flooding into rivers and oceans have been causing problems for years -- clogging waterways in cities, increasing the risk of floods, and injuring or killing marine animals who ingest or become trapped by plastic packaging.
The problem has grown so bad that officials in Bali last month declared a "garbage emergency" across a six-kilometre (3.7-mile) stretch of coast that included popular beaches Jimbaran, Kuta and Seminyak.
Officials deployed 700 cleaners and 35 trucks to remove roughly 100 tons of debris each day to a nearby landfill.
"People with green uniform were collecting the garbage to move it away but the next day I saw the same situation," said German Claus Dignas, who claimed he saw more garbage with each visit to the island.
"No one wants to sit on nice beach chairs and facing all this rubbish," he added.
Bali's rubbish problem is at its worst during the annual monsoon season, when strong winds push marine flotsam onto the beach and swollen rivers wash rubbish from riverbanks to the coast, according to Putu Eka Merthawan from the local environment agency.
"This garbage does not come from people living in Kuta and nearby areas," he told AFP.
"It would be suicidal if Kuta people were doing it."
Some 72 kilometres from Kuta, Mount Agung has been threatening to erupt for two months, prompting tourists to cancel visits and displacing tens of thousands of villagers living within a
A 10-kilometre radius of the volcano's crater.
But the island's waste problem is no less of a threat, said I Gede Hendrawan, an environmental oceanography researcher from Bali's Udayana University.
"Garbage is aesthetically disturbing to tourists, but the plastic waste issue is way more serious," he told AFP.
"Microplastics can contaminate fish which, if eaten by humans, could cause health problems including cancer."
Indonesia is one of nearly 40 countries that are part of UN Environment's Clean Seas campaign, which aims to halt the tide of plastic trash polluting the oceans.
As part of its commitment, the government has pledged to reduce marine plastic waste by 70 percent by 2025.
It plans to boost recycling services, curb the use of plastic bags, launch cleanup campaigns and raise public awareness.
Still, the scale of the problem facing Indonesia is huge, due to its population of more than 250 million and poor waste processing infrastructure.
Hendrawan, who says both locals and tourists are responsible for the island's rubbish problem, urged authorities to invest more resources to tackle the problem.
The Bali government should spare more budget to raise people's awareness to take care of local rivers, not to dump waste," he said.
"The central government should boost the campaign to reduce the use of plastic packaging and ban free plastic bags at convenience stores."