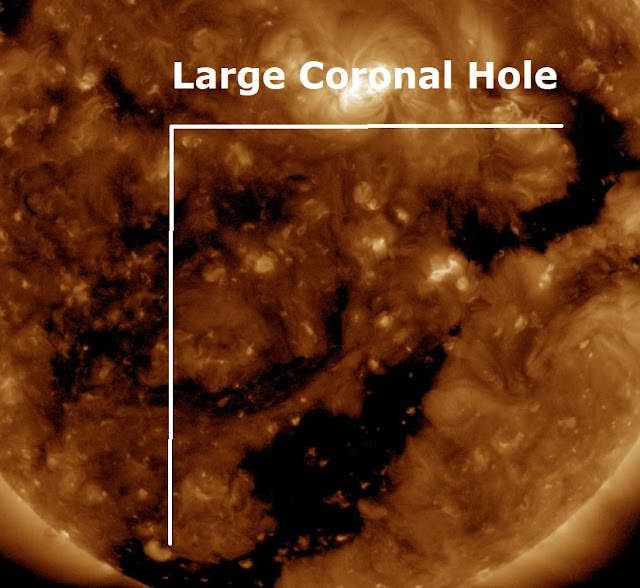 Credit SDO
Earth is inside a stream of solar wind flowing from the indicated coronal hole, see above.
A sprawling coronal hole on the face of our Sun is ejecting a high-speed stream of solar wind which is battering our magnetosphere which should reach speeds of 600km per second later in the day and this is causing magnetic unrest and auroras around the Arctic Circle.
According to Spaceweather.com, the solar wind is flowing from a sprawling hole in the sun's atmosphere.
Our planet should remain inside the gaseous stream for at least 24 more hours.
Arctic sky watchers may, therefore, expect auroras throughout the holiday. Regular readers of The Big Wobble will know solar storms and new and full moons are linked to causing seizures and migraines in people and dogs, behaviour problems in children and enhanced medical problems for people in Alaska.
I frequently receive emails from a wonderfully brave man from Alaska, his name is Bill Laughing-Bear who suffers from Traumatic brain injury (TBI).
Because of his injury, Bill can't use a computer because the screen causes him seizures or terrible migraines so his mother Tina types his work and thoughts for him.
Bill heads a TBI peer support group called “The Deadheads” who have been monitoring and charting the cause and effect of solar wind and the geomagnetic storms that affect earth’s magnetic field.
He gets reports from others who also have migraines and side effects, such as seizures, when these storms hit earth.
They have also noted that dogs are having seizures at the same time people are.
It would appear, Bill has found a link to people and animals who live further north, or closer to the polar regions are more sensitive to solar activity.
Bill follows The Big Wobble for the frequent space weather updates and the research into coronal holes and their influence on our planet and Bill has come up with some remarkable updates, below is the latest email from Bill.