"New Delhi has become a gas chamber," levels of PM2.5 that enters deep into the lungs and bloodstream, reached 703 double the mark of 300 that authorities deem as hazardous. 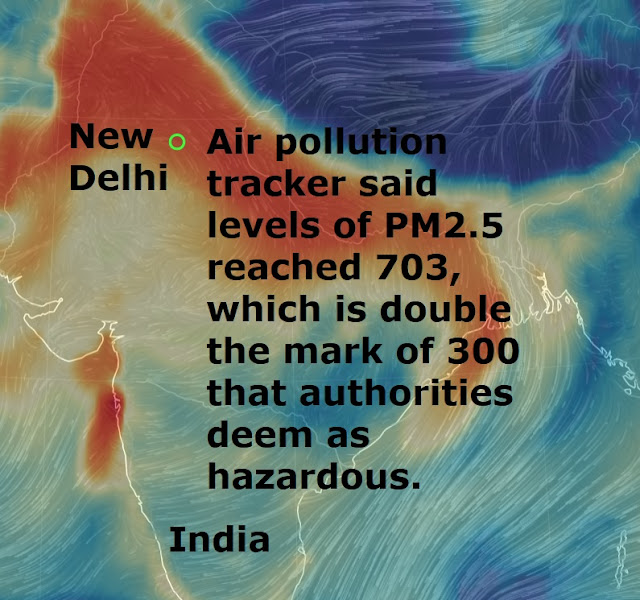 The Indian capital was enveloped by a shroud of toxic smog on Tuesday, forcing the Indian Medical Association to declare a public health emergency and advised schools to be shut.
"This is a public health emergency, so everyone should stay indoors, no jogging, running or walking outside," said Dr Krishan Kumar Aggarwal, the head of the Indian Medical Association (IMA).
On Tuesday morning, the US embassy air pollution tracker said levels of PM2.5, tiny particulate matter that enters deep into the lungs and bloodstream, reached 703, which is double the mark of 300 that authorities deem as hazardous.
"This is like a heavy rain of PM 2.5.
In heavy rain, you don't venture out," he told Al Jazeera.
At 1pm local time, the tracker showed AQI (air quality index) at 728, a level that leaves even healthy people at risk of serious respiratory problems.
Arvind Kejriwal, the chief minister of Delhi, was quick to comment on the worsening pollution situation in the capital.
"Delhi has become a gas chamber," he tweeted.
"Every year this happens during this part of the year.
We have to find a solution to crop burning in adjoining states," he said referring to smoke caused by the burning of crops in the northern Indian states near Delhi.
Children and elderly are more at risk, warned Dr Aggarwal barely a week after a report by science journal Lancet said half a million Indians died prematurely due to PM2.5.
"The government must take all appropriate measures so that schools are shut and people don't have to go outside.
People suffering from respiratory conditions might feel worse, this might even induce a heart attack in patients with pre-existing heart problems," Aggarwal told Al Jazeera.
The Delhi government followed through, as it announced closure of primary schools from Wednesday.
By 10am on Tuesday, the Central Pollution Control Board (CPCB) recorded "severe" air quality, meaning the intensity of pollution was extreme.
The last time air had turned "severe'" was on October 20, a day after Diwali festivities.
Since then, the CPCB pollution monitors have been recording "very poor" air quality, which is comparatively better than "severe" but alarming as per global standards.
"My 12-year-old son suffers from asthma.
He woke up with breathing problems in the morning today.
He is coughing as well," says Vidya, a 45-year-old woman who lives in the slum village of Tughlaqabad in south Delhi.
Doctors at the IMA have also asked the city's biggest running race, the Delhi Half Marathon, scheduled on November 19 to be cancelled.
Crop burning and industrial pollution from adjoining states add to the bad air in New Delhi, according to experts.
According to the Haryana Pollution Control Board, farmers in northern states like Punjab, Haryana and Rajasthan burn millions of tonnes of crop waste around October every year to clear farmland before sowing the winter crop.
An estimated 35 million tonnes are set afire in Punjab and Haryana every year, which contributes to the haze and smog in New Delhi.
According to local media reports, crop stubble were burned in 640 locations across neighbouring Haryana state on Monday.
As air quality deteriorated, earlier last month, the Environment Pollution (Prevention and Control) Authority (EPCA) ordered diesel generators and a power plant in Delhi to be shut down, while also directing closure of some brick kilns and the burning of rubbish to stop.
On Tuesday, the EPCA, appointed by the Supreme Court, also recommended hiking the parking fees for private vehicles by four times as Delhi struggled with its worst pollution of this year.
But Delhi's air quality index revealed these measures are clearly not enough to prevent pollution levels from rising.
The Lancet Commission has suggested that India can tackle ambient outdoor air pollution, in the short term, by first identifying sources of pollutants to enable targeted interventions.
This can be done by installing dust management systems, establishing monitoring systems, mandating improved fuel quality and engine standards.
In the medium term, the expert commission calls for criteria for cleaner vehicles, including testing stations, control on diesel vehicles, incentives for use of electric and hybrid vehicles and upgrading the public transport
In the absence of concerted government action on battling pollution and political blame-games, courts have stepped in several times in the past years.
Last month, the top court temporarily banned the sale of firecrackers in and around New Delhi in the face of the Hindu festival of Diwali sparking debate over the decision.
It also outlawed the sale of luxury diesel vehicles and ordered a tax on trucks entering the city.