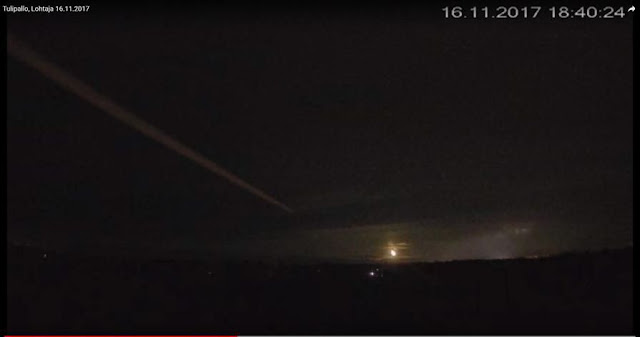 Photo kaleva.fi
A probable meteorite caused a huge blaze in the sky and major noise in a large area of northern Finland on Thursday evening, media reports said.
Based on phone calls from the public, the regional alarm center in Oulu first gave an alert about "a medium level air crash" before 7 p.m. local time (17:00 GMT), but the information was soon corrected as air traffic control could not verify any plane being missing.
Following the exclusion of an air crash, the Oulu alarm center concluded that it was very likely a meteorite.
Jukka Harmanen, a rescue service chief in the Lapland region, told newspaper Kaleva that a fireball was first seen in the sky, followed a minute later by a major sound wave.
"It was like the sound of an artillery barrage," he said. Calls to the rescue services came from an area hundreds of kilometers in diameter.
The southern limit was the town of Kokkola.
Images were uploaded to social media by residents.
The northernmost calls came from Nellimo, in Norway.
Harmanen said he was pleased with the way the alarm system was now tested.
He said the information about the situation reached "higher levels" very soon, before the actual nature of the event could be verified.
He did not define what the "higher levels" meant.
Finnish authorities did not receive any reports about actual damage on the ground.
Rescue supervisor Mauri Saniola in Inari told national broadcaster Yle that windows had been rattling and pressure had been noticed inside buildings.
Jouko Manninen, a researcher of space physics at the Sodankyla observatory, told Yle late Thursday the object could have been part of a man made object such as a satellite.
Manninen was unwilling to suspect the object was a missile, also in consideration of its direction of movement.