Madagascar's airborne pneumonic plague set to contaminate 10,000 people by the end of November and is now the worst outbreak in over 50 years 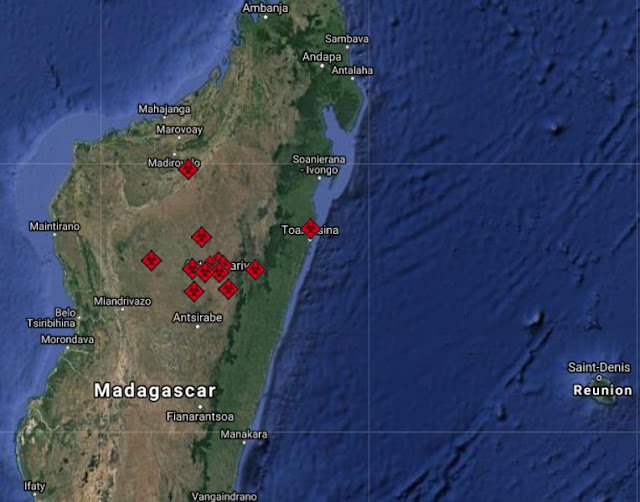 The deadly airborne pneumonic plague which is sweeping Madagascar has increased by a massive 37% in just five days.
The World Health Organization (WHO) now states there are 1,801 suspected cases - significantly higher than the 1,309 it reported last Thursday and is now officially the worst outbreak in over 50 years.
If the rise in cases continues as it is, 10,000 people can be expected to be contaminated by the end of this month.
In 2017, the plague came early to Madagascar and spread quickly. When it began to move out from the areas where it traditionally occurs, people became increasingly alarmed - both within the island nation and in neighbouring territories and countries.
From August to late October [2017], more than 1800 suspected, probable or confirmed plague cases were reported, resulting in 127 deaths.
This outbreak is unusually severe, and there are still 5 more months to go before the end of the plague season.
WHO has acted quickly, releasing funds and sending experts and supplies to Madagascar, while supporting neighbouring countries to reduce the risk of regional spread.
Plague is one of the oldest - and most feared - of all diseases. Historically, the plague has been responsible for widespread pandemics with high mortality.
It was known as the "Black Death" during the 14th century, causing more than 50 million deaths in Europe.
Nowadays, plague is easily prevented and treated with antibiotics if detected early enough, and infection can be prevented through the use of standard precautions.
"An outbreak of plague no longer unfolds in the manner portrayed by our history books," said Dr Sylvie Briand, Director of WHO's Infectious Hazard Management Department.
"Plague is an old disease, but the challenges it poses today is contemporary and fundamentally different from what we had even 40 years ago."
Despite the relative ease of treatment, plague's association with the Black Death weighs heavily on the popular conscience - and is regularly cited in media reports and tabloid headlines about outbreaks.
So it is important to strike a balance between encouraging countries in the region to be ready to act in case of an outbreak while avoiding the panic that could result in unnecessary or counterproductive measures such as trade restrictions or travel bans on affected countries.
Days after being alerted to the plague outbreak in Madagascar, WHO conducted an assessment to determine the risk of further spread. Taking into account the country's capacities and vulnerabilities, the assessment found that the overall risk of further spread at the national level was high, at the regional level was moderate, and at the global level was low.