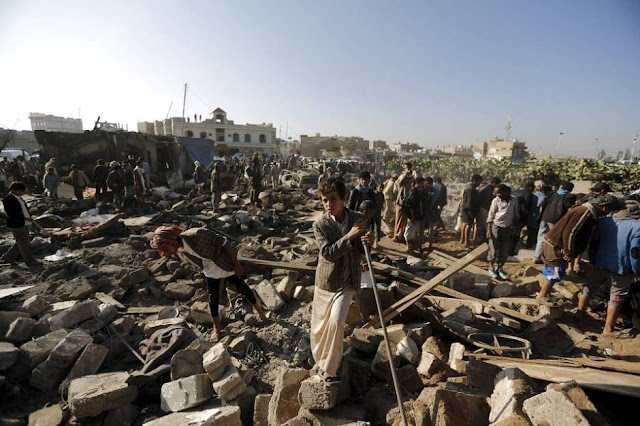 Photo dupolsoc.wordpress.com
Three people have died of suspected diphtheria in conflict-hit Yemen, doctors said Wednesday, as the World Health Organisation and International Committee of the Red Cross warned the disease was spreading.
"Currently, there is an increase in diphtheria cases, due to the poor vaccination coverage for children under five years of age," an ICRC spokeswoman told AFP.
The WHO also confirmed diphtheria cases had appeared in Yemen, where war has left hospitals struggling to secure basic medical supplies including vaccines.
In the port city of Hudaydah, paediatrician Ousan al-Absi at the Al-Thawra hospital said three people had died of diphtheria over the past 24 hours.
"We were surprised by the emergence of diphtheria cases here.
We diagnosed and gave them emergency care as best we could," he said.
"Some of them were dead when they arrived."
Diphtheria, a bacterial infection that is preventable by vaccine, attacks the nose and throat and - if left untreated it attacks the heart and nervous system.
While it is treatable, the infection can be deadly, particularly for children.
The US-based Mayo Clinic estimates up to three percent of those who contract diphtheria will die.
More than 2,000 people have died of cholera in Yemen this year, adding to the 8,600 who have died in the conflict between the Saudi-backed government and Houthi militias since 2015.
The United Nations has warned that Yemen will face "the largest famine the world has seen for decades".
There were more than 925,000 suspected cholera cases with over 2,200 associated deaths in Yemen as of Sunday, while key ports for humanitarian shipments remained closed, said the United Nations on Wednesday.
Aid workers continue to respond to the outbreak, but fuel to run hospital generators and to pump clean water will run out in less than three weeks, Deputy UN spokesman for the secretary-general Farhan Haq quoted the UN Office for the Coordination of Humanitarian Affairs (OCHA) as saying. Vaccines needed to treat diphtheria will also run out in two weeks, warned OCHA. Ships and planes carrying humanitarian supplies have been unable to reach Yemen since the start of a blockade on Nov. 6, said Haq.
The Saudi-led military coalition, which is fighting Houthi rebels in Yemen and is trying to restore the government of President Abdrabbuh Mansur Hadi, blocked land, sea and air access to Yemen after Saudi Arabia intercepted a missile launched by Houthi rebels toward the Saudi capital city of Riyadh on Nov. 4.
The closure has sparked international outcry as it further deteriorated the already dire humanitarian situation in Yemen.
UN humanitarian aid chief Mark Lowcock, who briefed the Security Council last week, warned that Yemen would see the world's largest famine in decades unless the blockade is lifted.
The Security Council stressed the need to keep all seaports and airports functioning, including the seaport of Hudaydah, a critical lifeline for humanitarian aid and other essential supplies.
The council demanded parties provide "full, safe, rapid and unhindered access" for humanitarian supplies and UN personnel to all affected governorates in the war-torn country.
More than two-thirds of people in need and more than 80 percent of all cholera cases are located in the areas closest to Hudaydah and Saleef ports, according to the United Nations.
Saudi ambassador to the United Nations, Abdallah Y. Al-Mouallimi, said Monday that the Saudi-led coalition would reopen seaports and airports in areas controlled by the Yemeni government within 24 hours.
But he said those in rebel-held areas, including Hudaydah and Sanaa, would remain closed unless a stricter UN verification and inspection mechanism is in place over cargo transferred through those ports.
The entire population of Yemen is dependent on food, fuel and medicine imports, primarily through seaports and more than 17 million Yemenis, or more than two-thirds of the population, are already food insecure, according to the United Nations.
The World Food Program said Monday that the current stock of rice would run out in 111 days and stock of wheat in 97 days.