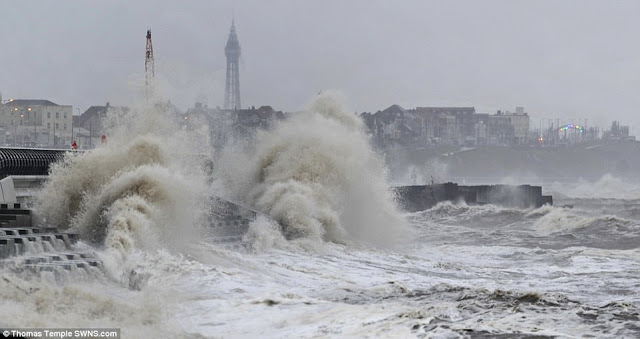 More than 70 people and 20 horses had to be rescued from floods in Lancashire as bad weather hit the UK.
Flooding is causing chaos across Cumbria today with roads, schools, train services and sports matches cancelled or closed.
Trains are no longer running between Preston and Lancaster with rail staff telling passengers: "It's too dangerous".
Train delays and cancellations continue into the evening, with 40-minute delays to those travelling on the line between Arnside and Carnforth. Passengers attempting to get home to Cumbria are reporting 'chaos' at Preston Railway Station.
Carnforth Railway Station is partially flooded.
The Environment Agency is warning residents to take "immediate action".
Fire crews are removing floodwater from houses in Keswick and Wigton.
Trains between Carlisle and Barrow are starting from Maryport.
Weather warnings for rain and wind remain in place until tomorrow morning.
The following updates include all trains, roads and schools across Cumbria.
At 4.30pm, a Cumbria County Council spokesman said: "Cumbria County Council's Fire and Rescue Service and Highways Teams are currently working tirelessly to mitigate the disruption caused by the current heavy rain across Cumbria.
"The county council's Highways Teams have been battling to keep open as much of the county's road network as possible in the face of numerous incidents of localised flooding."
In an update released at 3.30pm, a police spokesman said: "Roads across the county are being affected by the ongoing rainfall.
"Police would like to reiterate their advice to motorists to drive to the conditions following continued rainfall across the county.
Meanwhile in Wales...
Drivers are asked to take care, slow down and not attempt to drive through flooded roads."
The torrential rain which has struck Pembrokeshire today (Wednesday) has begun to cause problems with flooding.
Business at Castle Square have been affected as drains struggle to cope with the water and manhole covers lifted.
Flash flooding across the county caused by a degree of heavy rainfall.
Leaves have blocked up the drains and they cannot cope with it.
In some places the rainfall has been so heavy it has started to lift the lid of the drains.