More West-Coast misery as more than 2,000 leopard sharks have mysteriously died in the San Francisco Bay area along with other species recently 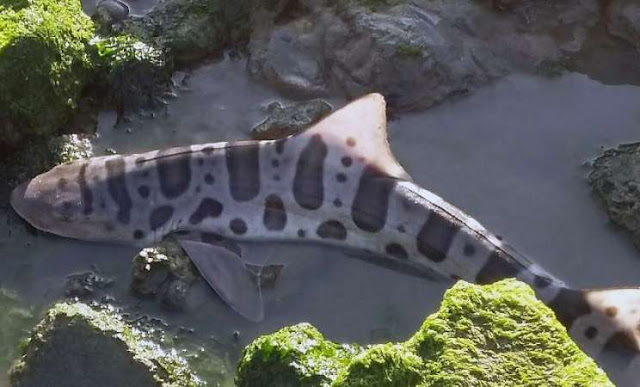 Photo daily-sun.com
As many as 2,000 leopard sharks have mysteriously died in the San Francisco Bay over the past few months.
The California Department of Fish and Wildlife says determining the cause is not a priority for the state since the sharks are not threatened or endangered, however, scientists say additional research and resources are crucial since the threat is now believed to be preying on other marine life.
"This year is unusual in that there has been a large number of other species that have also been dying," said Dr Mark Okihiro, a research scientist with the California Department of Fish and Wildlife.
"This pathogen can tackle a variety of different species ... we've had a much more diverse group of fish that have been found dead in the San Francisco Bay."
At least 500 bat rays, hundreds of striped bass, 50 smooth-hound sharks and about 100 halibut died in the bay between February and July, according to Okihiro's estimates.
The NBC Bay Area Investigative Unit obtained the most recent government estimates for the amount of marine life likely killed by the parasite known as 'Miamiensis avidus.''
The California Department of Fish and Wildlife released the data on July 21, 2017.
Similar shark deaths in the area date back 50 years and have gone unexplained.
Okihiro, however, now believes a parasite may be behind the mysterious die-off that has plagued the Bay Area.
"We're pretty confident at this point," Okihiro said.
"It's called Miamiensis avidus ... it's a small single-celled organism.
It's very similar to the common amoeba."
Okihiro regularly performs necropsies on stranded sharks found along the bay and says researchers at UC San Francisco helped him identify parasite DNA in a large number of those shark samples.
The deadly pathogen sneaks in through the shark's nose and slowly eats away at the brain, Okihiro says, oftentimes causing sharks to beach themselves or swim in circles.
A leopard shark, exhibiting that very behaviour, was spotted just outside the ballpark during a recent San Francisco Giants game and was likely in the process of dying.
Okihiro estimates 1,000 to 2,000 leopard sharks have died in the bay so far this year, however, he concedes the death toll could actually be higher.
"The sharks you see on shore are just a small fraction of the sharks that are actually dying in the bay," he said.
Sharks are not naturally buoyant.
Unless they are actively swimming, their bodies sink.
As a result, infected sharks that die in deep water may never actually wash up on shore.
"I think it's almost certain that the number of sharks that have died is much higher," said Dr Andrew Nosal, a marine biologist at UC San Diego and a top expert on leopard sharks, the main species that have washed up dead in the bay.
"We have to find out what's killing these sharks."
Nosal's ongoing research centres on the migration patterns of leopard sharks.
He says it is crucial the state dedicate resources towards investigating the cause of the sharks' mysterious demise.
"If we don't find out, then there's nothing we can do about it," he said.
The NBC Bay Area Investigative Unit recently joined Nosal and his colleague on their research boat off the coast of San Diego's La Jolla Cove, a known leopard shark hotspot.
"If you remove leopard sharks from the population, it is going to have a chain reaction," Nosal said. "They're eating other things and other things are eating them."
Researching the cause of the die-off isn't actually Dr Mark Okihiro's job.
He is officially in charge of assessing the health of white sea bass for the California Department of Fish and Wildlife, but he's been researching shark deaths from home in his spare time.
He performs necropsies on the dead sharks on his patio, studies bacteria samples in his kitchen, and examples tissue samples in his living room.
"We'll probably have to wash this [table] cloth before Thanksgiving," Okihiro joked while giving the Investigative Unit a tour of the makeshift lab in Southern California.