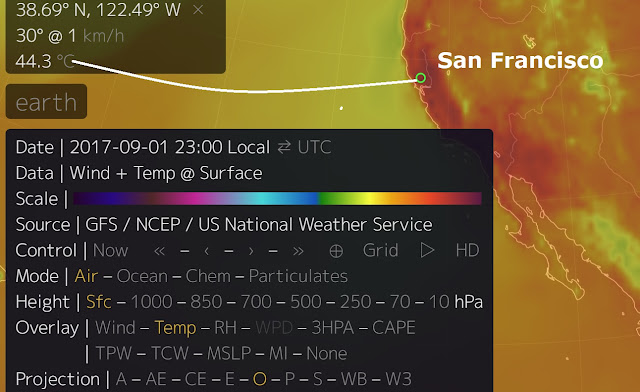 Earthwindmap
Record temperatures were shattered in San Francisco Friday and that caused a lot of issues on public transit for commuters.
The heat wreaked havoc on the evening commute for many BART and Muni riders.
Muni says the oldest vehicles in its fleet had the toughest time and Saturday's heat could cause another day of delays.
Commuters heading home for the holiday weekend faced long delays.
"There's always delays when it's hot, and even not when it's hot," said one commuter.
Those arriving from the East Bay shared stories of suffering.
When asked how hot it was on one of the BART trains, a rider replied, "I don't have a thermometer, but probably 120 degrees."
"The ride here was miserable," said Dublin resident Lisa Domino.
"The air was barely on -- sweating.
It was really just miserable."
Both BART trains and Muni buses struggled to operate in the record-setting heat.
"Some of our older electric vehicles are overheating where the bus connects to the overhead wires," said SFMTA spokesperson Paul Rose.
"What we're doing is stopping those vehicles, letting them rest for a little bit and then carrying on with service."
Around the city people also struggled to stay cool.
Some suggested drinks in a cool bar and others were surprised about normally busy parks being deserted.
"I was surprised, shocked because there was nobody here.
But I understand because they can't play," said a park visitor. Folks at Dolores Park enjoyed the evening breeze dreaming of cooler days ahead.