Strong magnitude 5.4 strikes the Chilean capitol Santiago this morning! Foreshock of something bigger? 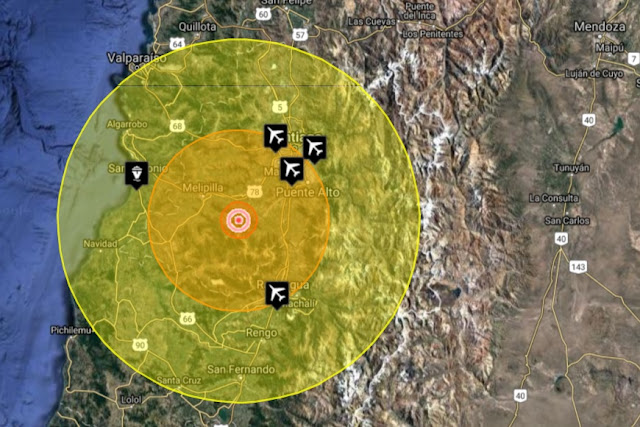 RSOE Alert map
A very strong magnitude 5.4 struck the Chilean capitol Santiago this morning leaving me wondering if it could be a foreshock of something bigger to come in the next few hours, stay tuned.
The quake shook buildings and woke residents in the Chilean capital Santiago in the early hours of Wednesday morning.
The tremor, with a magnitude of around 5.4, struck 36km (22 miles) northeast of the city at 3.15am (local time, according to the European-Mediterranean Seismological Centre.
Witnesses in the capital said the tremor was felt very strongly.
One resident said: "Lots of shaking!
Slight at first, one big shake, then continued for about 30 seconds.
Another resident, in Las Condes, added: "It was strong but it felt short."
Chile, located on one of the "Pacific Ring of Fire" fault lines, has a long history of quakes, including the largest recorded in history, a 9.5-magnitude quake in 1960.
The long, slender country runs along the border of two tectonic plates, with the Nazca Plate beneath the South Pacific Ocean pushing into the South America Plate, a phenomenon that also formed the Andes Mountains. Chile's emergency service Onemi said it did not have any reports of damage to services or infrastructure and the Chilean navy said the quake did not generate conditions to cause a tsunami along the coast.