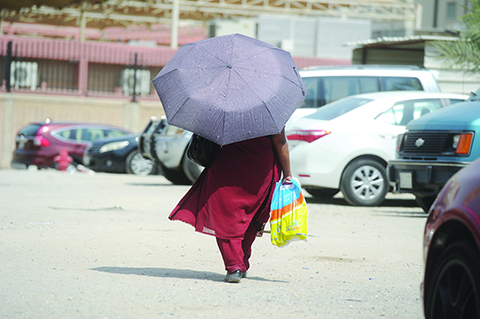 Photo news.kuwaittimes.net
Birds in Kuwait have reportedly been dropping from the sky as temperatures soar to 50C across the Middle East.
The temperature in Kuwait has been consistently above 45C but the added humidity in the region is making it seem even hotter, creating extremely difficult living conditions for both humans and wildlife
The Middle East has been hit with an 'ungodly' heatwave so extreme Iraq's government ordered all of its civil servants to go home on Thursday, when temperatures rose above 50C.
Temperatures are expected to stay above 45C for the next week, with the UK Met office predicting temperatures as high as 50C this weekend.
Meanwhile Kuwait will see highs of 47C and 44C in Riyadh.
It comes after temperatures above 48C every day this month in the Iraqi capital.
Iraq's underfunded power network is struggling to cope with the increased demand from air conditioning and water coolers.
"It's really hard because of the lack of electricity, at home electricity is not good.
We use 60 per cent of electricity from generators," said Baghdad resident Murtada Faisal.
Mr Faisal said public showers offered by the Government as a means to battle the heat were "like a bandage".
"What we need is a long term solution like trees and water tunnels," he said.
Mr Faisal said green spaces had been lost to new housing developments in and around Baghdad and there was not enough water to sustain the trees that the Government had planted.
The heatwave is also taking its toll on Iraq's military, who often spend long periods standing outside. Mr Faisal said he noticed increased friction between soldiers and civilians in the extreme weather. "It's really bad, it makes them angry.
When I go outside in Summer, I see more problems between people at the border," he said.
Another Baghdad resident, Mohanad, described the heat as "ungodly".
"The generator in my neighbourhood that provides electricity for about 300 houses has caught fire from the heat.
All it generates is smoke," he told the Guardian. "We don't know what to do. Men can go to the pool here but what do we do with our women, elderly and our babies?
Even the ACs in the car aren't working properly.
It's over 53 degrees today."
"It's disgusting. The government cannot do anything to help us even if they tried; the electricity generators were built in the 1960s and haven't been changed or modified since."
The heatwave in the Middle East comes after a heatwave dubbed 'Lucifer' fanned forest fires in Europe this week.
Both the Middle East and Europe have experienced extreme heatwaves this summer, which scientists warn is the result of global warming. In Iraq, temperatures in Baghdad have reached 50C, prompting the government to declare a mandatory holiday to allow state workers to stay at home.
Europe is battling a heatwave dubbed "Lucifer" which has seen temperatures climb above 40C across the continent.
The sweltering weather in Italy has caused wildfires and at least two people have died from the extreme heat in Romania and Poland. Italy, Spain, Greece, Poland, Hungary, Switzerland, Bosnia and Herzegovina, Croatia and Serbia have been the worst hit, with people being warned to stay indoors, avoid long journeys and drink plenty of fluids.