Nearly 2.5 months worth of rain in 9 hours forces 400,000 from their homes as 'rains unlike anything experienced before' hit Japan 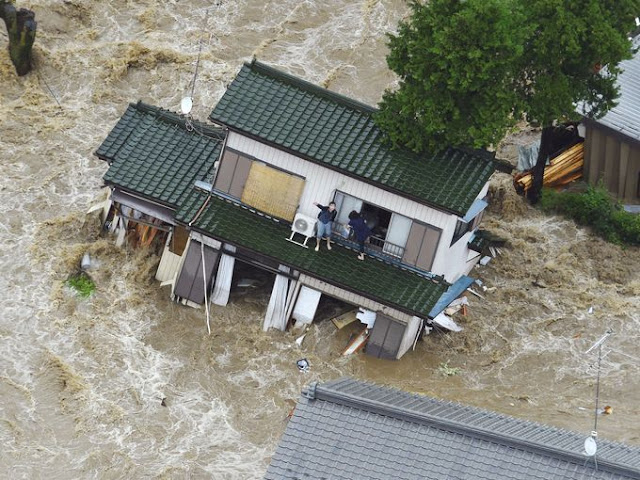 Photo istorya.net
At least 15 people are missing on Thursday (July 6) and 400,000 have been forced from their homes after huge floods swept away houses in southern Japan, tearing up roads as they surged through villages, government officials and media said.
Meteorologists warned of worse to come as soldiers and rescuers scrambled to evacuate hundreds of thousands of people out of the path of landslides and torrents of muddy water.
"We are seeing heavy rains unlike anything experienced before," a Japan Meteorological Agency official told reporters.
"It is an abnormal situation with serious danger looming."
The weather agency issued warnings for landslides and overflowing rivers over wide swathes of Kyushu, the southernmost of Japan's four main islands.
Heavy rains will likely continue in the region through Friday, the agency said.
Parts of Fukuoka prefecture on the southwestern island of Kyushu were hit by 774 mm of rain in nine hours on Wednesday, about 2.2 times the amount of rain that falls in a normal July, NHK national television said.
Some 7,500 rescuers, including police, firefighters and soldiers from Japan's Self Defence Forces, were mobilised to help with evacuations and search for the missing.
Forty helicopters were on standby until the weather improved.
"There are many reports of people whose safety cannot be confirmed, things like 'a child was swept away by the river' and 'my house was swept away and I can't get in touch with my parents'," chief Cabinet secretary Yoshihide Suga told an emergency early morning news conference.
"We will keep in close contact with the disaster-hit areas and work with all our energy to save lives and ascertain the extent of the damage," he said.
Fukuoka and Oita prefectures, both largely rural areas, were the worst-hit by the rain, which was caused by a low pressure area on the Pacific Ocean that fed warm, moist air into Japan's seasonal rainy front.
Residents spent a worried night at evacuation centres set up at schools and government buildings on high ground amid reports of landslides and flooded roads.
"It wasn't just the rain, there was thunder and lightning too.
I couldn't see anything ahead of me," one woman at an evacuation centre told NHK.
A schoolboy sitting with his family told NHK: "I haven't heard from some of my friends, and I'm really worried."
There were no immediate reports of major transportation problems, but television footage showed a railway line left broken and twisted by floodwaters.
The same area was pounded by heavy rain earlier this week from Tropical Storm Nanmadol, which has since passed out to sea.
The rain in Japan comes on the heels of a storm system that caused severe flooding across southern China that killed 56 people and cost almost US$4 billion (S$5.52 billion) in damage.