Another glimpse of the future! After deadly heatwave of 44 degrees Celsius 200 liters of rain per square meter floods parts of Bulgaria 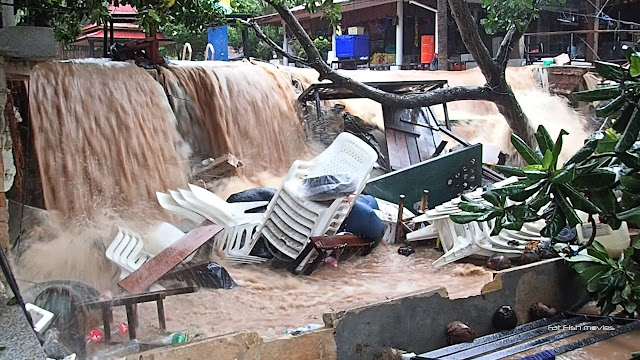 Photo doovi.com
Another glimpse of the future, an astonishing amount of rainfall hits Bulgaria after heatwave kills 5 with many more taken to hospital as temperatures hit 44 degrees Celsius (111.2 degrees Fahrenheit). In the Western Bulgarian town of Samokov, the municipality is assessing the damage done by the torrential rainfall experienced Monday.
Mayor Vladimir Georgiev told Bulgarian National Television (BNT), last night, 15 teams had been busy draining people's homes after the rain had turned streets into rivers.
In Samokov itself, but also in villages around the town, a lot of damage had been registered to the infrastructure.
According to Georgiev it is too early to release figures, since the damage needs to be calculated first. Several streets were damaged, while basements, houses and apartments were flooded.
This includes public buildings.
During the heavy rainfall, the authorities on site received 560 calls.
In the region around Samokov, 200 liters of rain per square meter had fallen on July 3, 2017.
By now, the situation in Samokov has normalized.
Mayor Georgiev has promised help to affected inhabitants.
Five people died on Saturday as soaring temperatures hit the Bulgarian capital Sofia where the mercury was expected to reach as high as 44 degrees Celsius (111.2 degrees Fahrenheit), hospital sources said.
By midday (0900 GMT), the city's emergency services had provided assistance to around 200 people who felt unwell, emergency services spokeswoman Katia Sungarska said.