140,000 without power caused by fire during record breaking heatwave in the Valley California 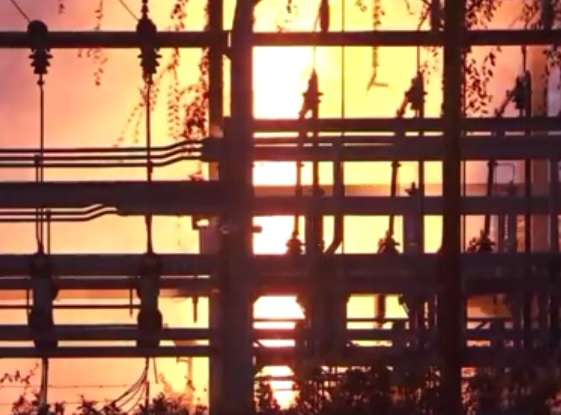 Photo ktl5
Power has been restored to more than a third of the 140,000 Valley homes and businesses affected by an intentional outage Los Angeles Department of Water and Power officials caused Saturday to aid firefighters battling flames at a DWP facility.
DWP estimated the initial power outage affected 140,000 customers on a very warm night in the following communities: Northridge, Winnetka, Reseda, Lake Balboa, Tarzana, North Hills, Granada Hills, Chatsworth, West Hills, Canoga Park and Woodland Hills.
But by about 10 p.m., power for 50,000 of those customers was restored, according to the DWP.
The power was purposefully cut to allow firefighters to safely work heavy flames at the plant at 18900 Parthenia St., the DWP reported. An explosion was first reported at 6:53 p.m., Brian Humphrey of the Los Angeles Fire Department said.
The facility is known as Receiving Station J, said LADWP spokesman Michael Ventre.
It was not known when all power would be restored.
An LADWP employee on the scene said he'd just gotten off a 16 hour-shift and would have to start another at midnight.
"It's got to be done," he said.
"People are without power."
Eighty-four firefighters used water and foam to extinguish the fire, Humphrey said.
The fire was in an energized storage vault that contained 50-60,000 gallons of mineral oil, he said. No injuries were reported.
The outages occurred following a day of record high temperatures across the Southland, including Woodland Hills, where the high reached 110 degrees, besting the previous record of 108, set in 2006. Downtown Los Angeles tied its record temperature of 96 degrees, which was set July 8, 1954.