'Straight out of an apocalyptic horror movie!' Rotting bird carcasses littering the streets,of Zug Island Detroit experts not sure why. 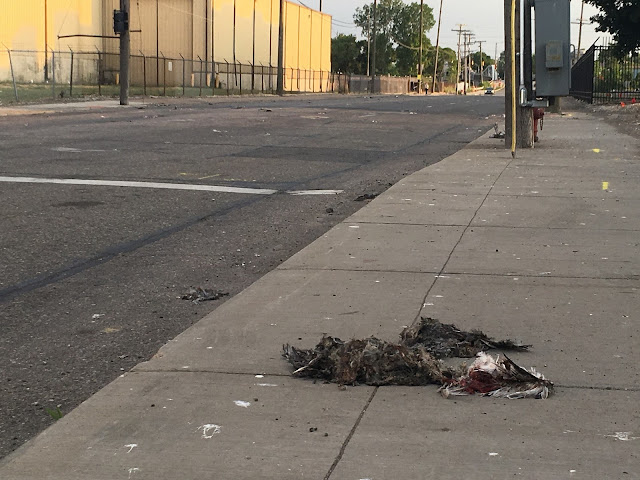 Photo newslocker.com
With hundreds of screeching seagulls hovering above and rotting bird carcasses littering the streets, the scene near Zug Island and the waste water treatment plant in Southwest Detroit seems straight out of an apocalyptic horror movie.
Young seagulls pitching camp near Jefferson Avenue are dying off en masse, and the Department of Natural Resources isn't quite sure why.
Residents and commuters reported the deaths, some claiming to have seen at least 100 bloodied and rotting bird carcasses at a time littering the roadway throughout the last week - week 5 to 11 Jun 2017.
The birds are young.
They have been picked at, and their bodies are everywhere.
The area is a highly industrial part of the city, and many have jumped to conclusions about toxic waste poisoning the birds.
Tom Cooley, a biologist with the DNR's wildlife disease lab team, is looking for a clear answer. Cooley and his team collected samples of the carcasses and are currently running multiple tests, including toxicology examinations for metals and pesticides, as well as botulism and histopathology exams looking for skin disease.
Some of the tests may take weeks to produce conclusive answers, but Cooley believes, for now, that the birds are simply competing for limited resources.